With coronavirus cases rising, event organisers might be best to postpone gathering 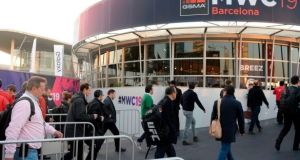 From a commercial point of view, it is easily understandable why the event’s organiser, GSMA, would be reluctant to pull the plug on it

With numerous big names having announced plans to miss Mobile World Congress (MWC) due to concerns over the coronavirus, the chances of it proceeding later this month are diminishing.

MWC is one of the telecom industry’s biggest gatherings, attracting over 100,000 visitors to Barcelona each year with between 5,000 and 6,000 attendees from China.

With the number of people being diagnosed and dying from coronavirus rising, a host of companies, including Ericsson, LG, Amazon, Nvidia and Sony have withdrawn from the event. Others, including Chinese companies Huawei and ZTE are at this point still due to attend although without any employees from their home country.

Irish tech firms are also still planning on going with Enterprise Ireland – which has a large pavilion at the event hosting a number of client companies – still proceeding with its plans.

From a commercial point of view, it is easily understandable why the event’s organiser, GSMA, would be reluctant to pull the plug on it.

“While the GSMA confirm some large exhibitors have decided not to come to the show this year with others still contemplating next steps, we remain more than 2,800 exhibitors strong,” it said in a statement issued on Sunday.

“While further planning is under way, we will continue to monitor the situation and will adapt our plans according to developments and advice we receive. We are contending with a constantly evolving situation, that will require fast adaptability,” GSMA added.

The organisers have this week implemented some restrictions including barring all visitors from the Hubei province in China, where the coronavirus first emerged. In addition, all attendees who have been in China recently will have to provide evidence that they have not been in the country for 14 days prior to MWC kicking off on February 24th.

As if that weren’t enough there will also be widespread temperature screening and a “no-handshake” policy is also being advised.

While these measures may go some way to reassuring attendees, it might be more advisable to postpone the event altogether until the situation becomes clearer.