No post-Brexit thaw as Boris freezes out business leaders 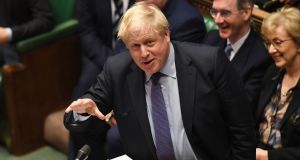 While attending an event for the queen’s birthday in 2018, Boris Johnson, the UK’s foreign secretary at the time, was asked about the concerns of business leaders in relation to Brexit. According to EU diplomats, he responded: “F**k business.”

At the time, the Confederation of British Industry (CBI) and other business lobby groups had been warning about the potential economic impact of Johnson’s Brexit strategy.

That was then, this is now, and surely Johnson, buoyed by his recent election victory, would move to reaffirm his party’s traditional pro-business stance and bridge the Brexit divisions that run through so much of British public life now?

Even in the glow of his recent electoral victory, Johnson can’t resist putting the boot in

Not so. On Monday he blackballed the country’s three main business lobbies – the CBI, the British Chambers of Commerce and the Institute of Directors – from a speech to business leaders in Greenwich in which he outlined his vision for a post-Brexit Britain. According to his aides, the three groups were not invited because they “wasted their time lobbying government to abandon the promises made to the British people”. And because they failed to prepare their members for the “realities” of a hard Brexit.

The episode illustrates the petty enmities that course through the current UK administration, something that doesn’t bode well for the upcoming free trade negotiations or for Ireland, which lies between the Britain and a clean EU exit. Even in the glow of his recent electoral victory, Johnson can’t resist putting the boot in. The spurious logic of his blackballing these groups suggests he thinks they should not have pursued their members’ interests in calling for the closest possible trading ties with Europe, but lobbied their members on the government’s behalf instead.

This sort of political tribalism is straight out of Donald Trump’s playbook. The US president has made a point of blacklisting certain groups and journalists. And both he and Johnson, more than most, know this approach of sowing division works – after all, it was what brought them both to power.