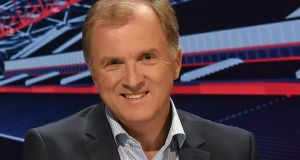 Hugo MacNeill: worked on the Aer Lingus initial public offering and on one of the two Eircom IPOs. Photograph: Stephen McCarthy/Sportsfile

Independent Seanad candidate and former Ireland rugby star Hugo MacNeill has stepped back from his role with investment bank Goldman Sachs in order to run for the upper house of the Oireachtas.

Sources close to Mr MacNeill, who is campaigning for a seat on the Trinity College Dublin panel, confirmed he had stepped back from the firm, in keeping with Goldman’s policies on employees running for political office.

There is no plan for him to return to the firm, even if his bid for a seat in the Seanad is unsuccessful.

The former Ireland and Lions fullback moved from London to Dublin in 2001 at the suggestion of the late Peter Sutherland. Mr MacNeill had been considering leaving Goldman Sachs to return home, but instead took up a role as the investment giant’s principal deal broker on the ground in Dublin.

He worked on many of the signature deals of the past two decades, including the Aer Lingus initial public offering and on one of the two Eircom IPOs.

The firm also worked for the State during the financial crisis, being paid €7 million for work across a wide range of bank restructuring operations, including in relation to Anglo Irish Bank, as well as capital-raising transactions for AIB, Bank of Ireland, EBS Building Society and Irish Life & Permanent. It went on to advise the government in relation to its stake in AIB on a pro-bono basis.

Nobody is stepping into Mr MacNeill’s role in Dublin on a permanent basis, but the firm will continue to provide support for its Irish clients from London.

1 How much state pension will I get next year?
2 Am I crazy to consider switching to an Ulster Bank mortgage?
3 Housing crisis here to stay in absence of big rethink, industry warns
4 Avolon appoints Paul Geaney as chief risk officer
5 Up or down – how much is your Local Property Tax this year?
6 PTSB plays down Ulster Bank talk as it sells €1.4bn of loans
7 Brexit to curb services trade with UK, accountants group warns
8 First Derivatives expects Covid-19 to accelerate growth
9 Irish tech company Asavie acquired by Nasdaq-listed Akamai
10 How long can Government afford to keep State pension age at 66?
Real news has value SUBSCRIBE