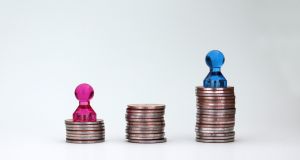 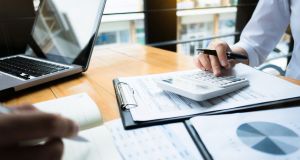 In every subsector of financial services, the CSO found men earned more than women. Photograph: iStock

Women in the financial sector earn an average of €25,000 less than men, data from the Central Statistics Office (CSO) shows.

More than one-third of all employees in the sector worked for either retail banks or the Central Bank in 2018, with a fifth working at insurance companies. But it was “other financial corporations” where workers commanded the highest salaries, with annual earnings in that subsector totalling €65,600. For the Central Bank and retail banks, average earnings were €60,000 while at insurance companies, they stood at €54,300.

The CSO’s data also looks at the sector more broadly and found that, in 2018, it contributed €21.7 billion to the Irish economy. The sector had total assets of €5.2 trillion, of which 44 per cent was in investment funds with 11 per cent in retail banks.

Banknotes became a far less common feature in the State between 2009 and 2018, the data also shows. There were 41 per cent fewer notes issued in 2018, when the total reached 242 million notes, than in 2009. The number of issued coins was more volatile, showing a less consistent downward trend. The CSO suggested that the fall in demand was linked to the development of electronic payments, better technology and digitisation.

1 If you think governments are spending money now, just wait
2 Remote working doesn’t suit everyone, and it exposes woolly leadership
3 Coronavirus: Construction sector most significant part of new shutdown
4 British exceptionalism backfires in style as Johnson tests positive for coronavirus
5 Volkswagen burning through €2bn in cash per week
6 Can husband keep savings and half the house in divorce?
7 Coronavirus: Medtronic aiming to make 500 ventilators a week
8 Will Covid-19 force Primark to rethink decision not to sell online?
9 Usit travel group in liquidation due to coronavirus crisis
10 Interim examiner appointed to food distribution companies
Real news has value SUBSCRIBE