State-owned health insurer will save €8.1m a year in interest payments 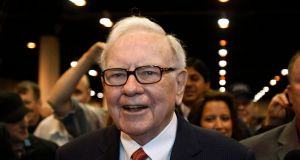 Warren Buffett: his Berkshire Hathaway’s €90 million loan in 2015 paved the way for VHI to be authorised. Photograph: Rick Wilking/Reuters

State-owned health insurer VHI has brought to an end its funding and reinsurance agreement with the Warren Buffett-owned Berkshire Hathaway, whose €90 million loan in 2015 paved the way for the insurer to be authorised. The early repayment of the €90 million loan, which was due to run for seven years, means VHI will save €8.1 million a year in interest payments, or some €40.5 million in total, by repaying the loan five years early.

VHI began a reinsurance relationship with Berkshire Hathaway in 2013, and in 2015 it raised €90 million subordinated debt through a funding agreement to bolster its capital position and enable it to comply with EU regulations on minimum solvency levels, and to seek authorisation from the Central Bank, which it subsequently did.

“The impact of this is the removal of the associated interest burden on our customers, one of a range of savings we have been able to pass to them through two consecutive price reductions,” said John O’Dwyer, chief executive of VHI.

In addition, the insurer’s multi-year reinsurance arrangement with National Indemnity Company, a subsidiary of Berkshire Hathaway, expired on December 31st, “with no replacement, which also reflects the board’s strong capital position”. According to the report, VHI had capital resources of some € 610.9 million at the end of 2017.

Elsewhere, the report shows that employees at the health insurer saw their wages rise by an average of 6 per cent in 2017. According to the report, average pay stood at €58,069 in 2017, up from € 54,697 last year, with total cost of wages and salaries standing at € 77 million.

In February 2017, VHI took full ownership of the Swiftcare walk-in clinics, which it had jointly owned since 2005 with Centric Health. The health insurer subsequently restricted access to the clinics to VHI members only.

VHI received risk equalisation credits of some €460.9 million during the year, up from €432.5 million in 2016, which is a payment to the insurer from the Risk Equalisation Fund for each insured person over 65 and for each claim paid that included a hospital stay. These payments compensate the insurer for having a disproportionate amount of older members.

1 Irish company paid €1.2m a year by collapsed Blumenthal-linked Australian restaurant
2 Should AIB compensate me for upsetting letter on arrears?
3 Hugo MacNeill steps back from Goldman Sachs role
4 Legal eagles yet to land; economy to grow 3.4% this year; and CEOs on social media
5 ‘I wouldn’t be a big saver. I tend to buy now and repent at leisure!’
6 Why bosses should not be afraid of speaking out on Instagram
7 Tax shifts won’t drive multinationals out of Ireland - Moody’s
8 High time: Netherlands moves to clean up absurd cannabis policy
9 BlackRock European fund pays €30m for Jacobs Inn hostel
10 Chris Johns: The Johnson administration will spend, and needs a quiet Treasury
Real news has value SUBSCRIBE