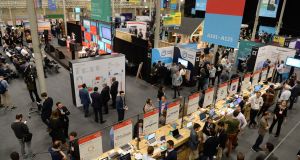 Fintech-focused public relations firm Wachsman is to create 50 jobs at its European headquarters in Dublin over the next two years.

The announcement was made at MoneyConf, a fintech event being held in Dublin.

Wachsman said it was looking to fill roles across numerous departments including public relations, events, strategy, operations and marketing.

The company, which has offices in New York and Dublin, was founded by David Wachsman in December 2015. It now employs 90 staff worldwide, including 26 at its offices at the Digital Hub in the Liberties.

Wachsman also announced it was to expand its service offerings to include event management and strategy.

1 Working from home: New costs, new stresses and little relief
2 Joint accounts: if one of us dies, can the other access the money?
3 We are ‘sale agreed’, but can we go back with a lower offer?
4 Airline stocks take off as coronavirus worries ease
5 Investor alleges fraud over collapse in property fund value
6 HSBC board rethinks overhaul and seeks even deeper cuts
7 Fierce debate brews as EU Commission lays out recovery plans
8 DAA offers workers up to two years’ wages in redundancy plan
9 Electrical contractors fear closure under new pay law
10 ‘I’ve so many outgoings with family life . . . it puts manners on you’
Real news has value SUBSCRIBE