‘The internet is awesome, but it is broken’ 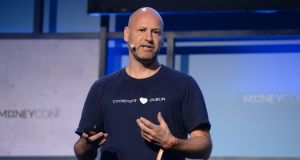 “The internet is awesome, but it is broken,” or so claims the co-founder of the popular cryptocurrency ethereum, Joe Lubin.

Speaking at MoneyConf, the fintech-focused event that has been organised by the team behind Web Summit, Mr Lubin outlined ways in which blockchain technology is set to bring about a revolution in terms of online security.

Mr Lubin said at present the internet was inherently unsafe because it wasn’t developed without a natively-built money or identity construct at its heart.

“It [the internet] was built in naive times and so security has evolved essentially as a patchwork,” said Mr Lubin, whose company ConsenSys officially opened a new Dublin hub on Monday.

“We have built a world of internet services that have turned out to be wonderful in so many ways but they have outgrown the architecture of the internet and the web.

“Because internet identity is essentially broken they [the services] have enabled exploitation of the human condition,” he added.

Mr Lubin is one of the key speakers at MoneyConf, which takes place at the RDS in Dublin today and Wednesday. Some 5,137 attendees from 84 countries are attending the event, which has relocated from Madrid to Dublin.

He said the current situation in terms of data protection and security for internet users is unsustainable. He added that blockchain technology represents a new kind of infrastructure that is infinitely better in terms of not only authenticating who someone is but also protecting their identity.

“We spray aspects of our identity onto the internet. It gets stored on servers that are not adequately secured and then monetised by corporations,” said Mr Lubin.

Blockchain technologies, which store blocks of information that are distributed across a network, are seen as a major breakthrough in terms of security as they bring about high levels of traceability and additional safeguards in economic transactions.

While most commonly associated with cryptocurrencies such as bitcoin and etherum, blockchain is expected to impact digital services and transform business models in a wide range of areas.

Mr Lubin said that with a more trustworthy, collaborative infrastructure with improved security, “a radically free market architecture with low barriers to entry” is available to content creators and service providers via the public blockchain.

A spin-off from Web Summit, MoneyConf has also previously taken place in Belfast. The organisers claim the conference is now the fastest growing event of its kind in Europe.

Having departed Dublin under a cloud two years ago when Web Summit relocated to Lisbon, Mr Cosgrave said it was great to be back in Dublin with MoneyConf.

“Dublin is a fantastic city for hosting events up to 20,000 people,” he said.

Mr Cosgrave also said MoneyConf may be the first of a number of events the company hosts here.