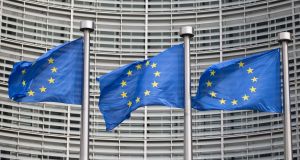 The European Commission’s Berlaymont building. Brussels is pushing for a shake-up of European tax rules to standardise the way corporation tax is calculated in a bid to clampdown on corporate tax avoidance. Photograph: Jasper Juinen/Bloomberg

The European Commission is proposing to fund a significant part of its next budget through the proposed Consolidated Common Corporate Tax Base (CCCTB).

The move to harmonise corporation tax rules across the bloc has yet to be agreed by member states and is vehemently opposed by the Irish Government, which views it as a threat to the State’s €8 billion corporation tax base.

The commission’s budgetary plan for the next seven-year period from 2021 to 2027 involves spending of just under €1.3 trillion with approximately €84 billion – €12 billion a year – coming from “a 3 per cent call rate applied to the new CCCTB”.

Brussels is pushing for a shake-up of European tax rules to standardise the way corporation tax is calculated in a bid to clampdown on corporate tax avoidance.

A senior commission source told The Irish Times that Brussels was keen to find new ways of financing the EU budget and was simply highlighting the fact that the CCCTB proposals, if agreed, could generate significant revenue.

She noted, however, the CCCTB proposal was subject to “a double unanimity issue” as it would have to be agreed in principle and then as part of the overall budget.

“This is a proposal. If it turns out that this is not possible then obviously there will have to be more recourse to the traditional areas,” she said.

“But the proposal is there and it would reduce the reliance on the GNI side,” she said, referring to the fact that the bulk of the EU’s budget is funded through member state contributions based the bloc’s Gross National Income (GNI).

A spokesman for the Department of Finance said: “By its nature, the CCCTB is a complex and detailed proposal and member states need to fully analyse and consider its potential impact on national tax systems. Member states are discussing and debating the various aspects of the proposal in the relevant tax working parties. These discussions at a relatively early stage and much more technical consideration is needed.

“Consequently, it is premature to predetermine the outcome of member states’ discussions, and as such it would not be prudent to rely on resources not yet agreed by member states for financing the EU budget.”

The CCCTB proposals, which were relaunched in 2016 in the face of controversy surrounding multinational tax rates, would see large firms pay corporation tax proportionate to where their sales, staff and headquarters are located.

The Republic would be the worst hit euro zone state because the formula proposed to tax corporation profits favours EU states such as France and Germany with large home markets over smaller exporting ones like Ireland.

The chair of the Irish Fiscal Advisory Council, Seamus Coffey, has warned that the State could lose up to €4 billion or 50 per cent of its current corporation tax base if the proposals are adopted.