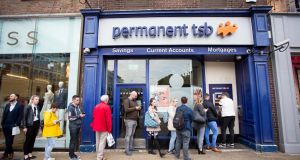 Permanent TSB: a significant portion of the customers the bank is looking to get off its book have “neither engaged with the bank or refused treatment”. Photograph: Tom Honan

Permanent TSB (PTSB) has set a deadline in six weeks for bidders to lodge final offers for a €2.2 billion portfolio of non-performing mortgages, which will enable the lender to reach a deal by the time it reports interim results in August.

Sources said that final bids are being called on July 19th for the so-called Project Glas portfolio, which equates to 11 per cent of its entire loan book, with Lone Star and Cerberus understood to be among short-listed parties circling.

The portfolio – which represents loans against 11,200 properties – is sub-divided into Project Nepal, made up of soured buy-to-let mortgages, and Project Tibet, comprised mainly of private dwelling home loans deep in arrears.

Reaching a deal to sell the loans by the time PTSB reports first-half results at the end of August would be a welcome development for the bank, which had indicated last month that a transaction may be done by the end of the year. PTSB has the worst non-performing loans (NPLs) among bailed-out Irish banks, at 26 per cent of its total loan book, at a time when the European Central Bank is putting pressure on lenders with high NPL ratios to move to the 5 per cent European average.

Eamonn Crowley, PTSB’s chief financial officer, said at the bank’s annual general meeting last month that the average loan on the market is almost four years in arrears, with some customers nearly seven years behind in repayments. He said that a significant portion of the customers PTSB is looking to get off its book have “neither engaged with the bank or refused treatment”.

PTSB moved last month to pull a batch of so-called split mortgages, amounting to 4,300 accounts, from the portfolio sale. These are restructured loans where a portion of the repayments are put on ice until a future date and continue to be counted as NPLs.

Sources have said that the bank is planning to move the loans off its balance sheet by selling bonds backed by the assets, in a transaction known as securitisation. This would allow PTSB to maintain a day-to-day relationship with the borrowers.