Barclays and HSBC shift some euro clearing from London to Frankfurt 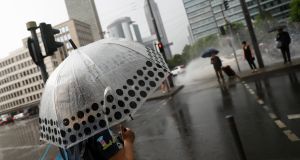 Two British banks are among the biggest swaps traders sending their euro interest rate swaps for clearing at Deutsche Börse, helping the German exchanges operator establish a toehold in a market that has become hotly-contested after the UK’s vote to leave the European Union.

Barclays and HSBC are among the top 10 most active participants in an incentive scheme that encourages banks to switch their clearing swaps – used by investors and companies to hedge risk – from London’s LCH to Frankfurt, according to the German exchange.

The scheme, which will share revenues with its biggest users, began in January and has boosted the notional volume of interest rate swaps cleared at its Eurex business to more than €7 trillion, compared to just over €1 trillion a year ago.

Amid the uncertainty over Brexit, Deutsche Börse pitched its scheme as an alternative to the derivatives business staying in London, where the EU wants to extend its supervision once the UK leaves the trading bloc. Most clearing of euro-denominated derivatives happens in London. Clearinghouses sit between two parties in a deal and manages the risk to the market if one side defaults on payment.

Deutsche Börse ran a points system to incentivise users to bring business to the market and signed up 30 banks, asset managers and market-makers. The five most active have been rewarded with seats on Eurex’s supervisory board for the next two years. The next five largest will sit on an advisory committee. After four years, the 10 most active users will keep their seats and share the profits permanently.

JPMorgan, the world’s largest swaps market participant, France’s BNP Paribas and German trio Deutsche Bank, Commerzbank and DekaBank, will have seats on Eurex Clearing’s supervisory board, according to Matthias Graulich, a member of Eurex Clearing’s executive board. The board seats have to be approved by BaFin, the German regulator.

The majority of the business that Eurex processes is in short-dated forward rate agreements, a market that is dominated by banks. Longer dated swaps, which represents users like manufacturers, energy suppliers and credit institutions, are mainly cleared at LCH, which is majority-owned by the London Stock Exchange Group. LCH has processed a notional $500 trillion in swaps this year.

UK economy stagnated in fourth quarter, amid turmoil over Brexit 07:48
Asian stocks mixed as US futures swing to a loss 07:34
Microsoft starts online seminars for DreamSpace students 07:20
How to budget your way through financial realities of Covid-19 06:39
Restaurants seek rent help, QIH lays off 600 staff, and podcasts playing a blinder 06:30