US banks pull back from lending to European companies 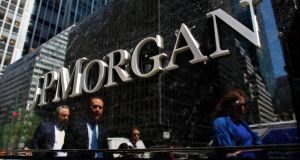 US banks are pulling back from lending to European companies during the coronavirus pandemic, fuelling concerns that Wall Street may be quietly withdrawing to its home market in a repeat of the last financial crisis.

In Germany, JPMorgan recently pulled out of talks over an additional credit line for BASF, the world’s largest chemicals group, according to people involved in the transaction. Similarly, Bank of America (BofA) lent half as much as the other six international banks that underwrote a €3 billion state-backed loan to sportswear giant Adidas.

Goldman Sachs – which helped underwrite a €3.5 billion syndicated loan for Italian-American carmaker Fiat Chrysler this month – did not take part in a similar €12 billion facility for German rival and long-standing client Daimler, leaving other lenders to make up the difference.

“We are increasingly observing an ‘America first’ attitude among large US banks,” said an adviser directly involved in negotiations between banks and corporates in Germany. “Those are not just idiosyncratic cases: there is a clear pattern.”

In the first quarter, the five large US banks’ combined market share in syndicated loans in Germany fell by more than a third to 14.6 per cent, according to Refinitiv data. This period captures only the start of the pandemic.

“Every bank is under the cosh of its national regulators, who in times of crisis show a huge home bias,” said Jan Pieter Krahnen, director of the Centre for Financial Studies at the University of Frankfurt. “This heavily influences risk management and regional exposure, which comes at the expense of clients abroad.”

The trend has attracted the attention of European regulators. “We have received many signals that foreign lenders are starting to retreat from the German market,” said a senior supervisory official. “We cannot force them to lend.”

In the UK, JPMorgan pulled out of a recent £324 million debt-and-equity rescue package for airport concession operator SSP, despite being the company’s corporate broker. Only British banks were left in the consortium.

At events and publishing group Informa, JPMorgan and BofA turned down a request for a short-term loan and were not among underwriters on a £1 billion share placement, even though the latter had been broker to the UK company for 10 years. BofA also turned down a potential capital raise for struggling cinema chain Cineworld.

The decline in lending has caused concerns in Europe about the reliability of US banks in a crisis. One reason Berlin politicians last year endorsed merger talks between Deutsche Bank and domestic rival Commerzbank was the desire for a “national champion” that would continue to lend at times of stress.

German companies that want to tap large government-backed loans are in a particular bind because they need the support of their existing lending group to access funds from state-owned development bank KfW.

KfW can shoulder as much as 80 per cent of new syndicated loans. But KfW insists private-sector banks take on the remaining 20 per cent, as well as guaranteeing existing credit lines, which need to be drawn first.

“If one bank in an existing consortium steps out of line, it’s not only that the others have to fill in the blank, but some of them may also start to get second thoughts,” said one person familiar with such negotiations.

While travel group Tui and sportswear maker Adidas have secured big state-backed syndicated loans, as many as 20 different blue-chip companies are still in talks, said people familiar with the negotiations.

Negotiations over a KfW-backed syndicated loan for steelmaker Thyssenkrupp have been held up, waiting for commitments from JPMorgan and Goldman, according to two people familiar with the matter. Thyssenkrupp declined to comment.

BofA, Goldman Sachs and JPMorgan declined to comment on specific clients, but stressed they had increased lending globally in recent weeks. While the data shows BofA’s share of syndicated loans has declined, the US bank pointed out it ranked second in league tables of euro-denominated bonds since March 18th, when debt markets reopened after the initial coronavirus shock.

JPMorgan said: “We extended over $25 billion in new credit to clients in March alone, and nearly half of that was in Europe. Our commitment to companies in the region remains unwavering.”

Senior US bank executives said that compared with American clients, European companies had drawn down more of their credit lines, reducing banks’ appetite for further lending. They also typically wanted to borrow money over longer time horizons whereas US companies saw bank loans more as a “bridge to markets”.

A European executive at a US bank said: “We have the same standards and procedures for all of our clients, and geography does not play any role.” However, the executive added that profit margins on loans were much higher in the US than in Europe, demand for credit was rocketing everywhere and that banks’ balance sheets were an increasingly scarce resource. “Every credit decision needs to be properly justified internally.”

Some US bankers said European lenders were acting “recklessly”, loading up their weak balance sheets with more risky loans that could turn into problems in years to come. “I don’t understand why the Europeans want to do these things,” said a senior investment banker. Additional reporting: Arash Massoudi. – Copyright The Financial Times Limited 2020