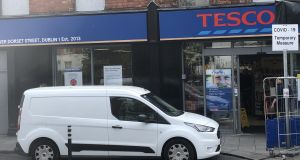 A van parked in an area allocated for pedestrians on Dorset Street. Photograph: Olivia Kelly

Dublin motorists are continuing to park in spaces reallocated to pedestrians to enable physical distancing during the coronavirus pandemic, it has emerged.

Over the last week Dublin City Council has begun installing bollards blocking off loading bays and parking spaces on the north and south sides of the city to give more space to pedestrians at pinch-points which are particularly busy or where the path is narrow.

“There seems to be a particular problem in certain villages, where there is significant on-street queuing to access supermarkets etc, on narrow footpaths, which gives rise to pedestrian congestion,” he said.

Next week, the council will begin installing a contraflow cycle lane on Nassau Street in the city centre and it has also introduced an online form on dublincity.ie to allow members of the public suggest locations where they believe additional road space is required.

The measures, which involve the use of low-rise lane separators known as “orcas” along with vertical bollards, have been in place for a week. Some drivers are ignoring them so they can park directly outside shops. In some cases, the manoeuvre involves driving over the barrier, while in others the motorist has to mount the footpath to access the space.

“Motor traffic acts like a gas rather than a liquid – it expands into any space afforded to it. Unless it is made physically impossible it’s not going to stop a lot of drivers,” Dublin Cycling Campaign spokesman Kieran Ryan said.

The measures implemented to date had been done on a “micro scale”, Mr Ryan said. “We need to develop this at a macro scale, following the type of measures recently undertaken in Milan, Brussels and Berlin, where they are looking at making large parts of their city centres car-free.”

He said such measures would be essential on narrow city streets, such as South William Street where the pavement is particularly congested, when businesses began to reopen but social distancing measures were still required.

Mr Ryan said he hoped as more sections of road were requisitioned, and drivers became more familiar with the measures, a greater degree of compliance would emerge. However, he said: “There is a legacy issue of loading bays being abused by the drivers of private cars, and by the drivers of commercial vehicles who will use them as parking spaces, rather than to deliver to shops.”

The spaces reallocated to pedestrians on Dorset Street were at noon on Friday fully occupied by vehicles. The driver of one van said he was aware of the distancing measures and was entirely supportive of them, but felt he had no option but to park in his usual space.

“I’m here every week for a maintenance job for Tesco. It usually takes a couple of hours, but, and I don’t like saying anything bad about any area, I can’t park around the corner or the van would be vandalised and broken into.”

He said he needed to have quick access to his van, and parking options on Dorset Street were limited. “I have to make 10-15 trips out to the van for each job, but I do my best not to get in anyone’s way on the path, because I know everyone is very nervous at the moment.”

The council said vehicles parked in a way that did not respect the new measures would be towed away by Dublin Street Parking Services (DSPS). “DSPS have been instructed to relocate offending vehicles that have parked in loading bays which have been cordoned off to enable social distancing.”

1 Travel rules unlikely to include mandatory quarantine or cancelled flights
2 California shuts down again as US coronavirus cases surge
3 US passengers fly into Dublin: ‘I’m here for six days. I guess I’ll have to stay inside’
4 Covid-19: 200 to 250 people arriving in Ireland from US daily - Coveney
5 Cowen under pressure to answer further questions on gardaí encounter
Real news has value SUBSCRIBE