Most motor insurers commit to providing rebate to customers 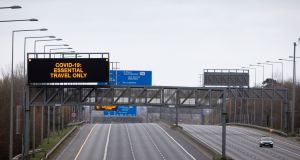 A virtually empty M50 in Dublin due to Covid-19 restrictions. Photograph: Tom Honan

Insurers covering three-quarters of the Irish motor market have agreed to offer refunds or discounts to customers as Covid-19 travel restrictions mean they expect fewer claims on policies. However, the sums involved are not likely to be significant for individual car owners.

A group comprising Allianz, Axa, FBD, RSA and Zurich said it would assess the effect the restrictions will have on its customers and pass on “appropriate financial supports”.

While not part of the formal announcement, Liberty said it was “exploring meaningful ways of supporting our customers with a rebate”.

While the precise extent of any relief remains unclear, it is understood that the insurers – most of which have British parents – will look to the example there where insurer Admiral said it would provide a £25 (€28.55) rebate.

No other insurer is currently offering reliefs in the UK market.

Aviva, the second largest player in the Irish market – with around 16 per cent of motor insurance business, according to the most recent figures – has not joined the group offering reliefs.

A spokeswoman for the company said it had offered the option on a “case by case basis to defer renewal premiums for a period”. The company has also given customers “the option to suspend their insurance cover for a period if they are not using their cars”.

Suspending cover would naturally mean no protection against theft, unless customers choose an option that offers cover only for fire and theft. In Aviva’s case this is available only for four weeks.

“We believe we can provide more value for our motor customers through a competitive quote at renewal,” Aviva said, adding that it would continue to monitor the volume of motor travel and claims.

Insurance Ireland, which represents the industry, said in a statement: “The financial supports, such as refunds or discounts, applied by each insurance company will reflect their individual claims experience to date.”

The lobby group noted that if Covid-19 restrictions on movement result in sustained lower road usage and claims frequency for the summer and beyond, “insurers have agreed to further review the situation”.

If a similar approach to Admiral in the UK is taken, the move will cost insurers around €37.5 million in refunds and discounts. That calculation is based on the fact that roughly two million motor policies exist in the State and it is expected that about 75 per cent of policies will be covered.

Minister for Finance Paschal Donohoe said the move was a “step in the right direction”, and called on the insurers to swiftly publicise the extent of refunds expected.

“Obviously it is for each insurer to look at its own situation and customer base. But I stress the importance for them to take a longer-term perspective and be generous with their customers at this time, reflecting the recent profitability of the motor insurance market,” he said.

The Republic is the first market in the world in which the major insurers Axa, Allianz and Zurich have committed to offering some form of rebate for their customers. RSA has already introduced a similar scheme in Canada but not in the UK.

Insurance Ireland said the precise amounts would “vary” from insurer to insurer. “Each insurer will independently calculate the detail of discounts/rebates involved and communicate with its customers in the coming weeks,” the statement from the lobby group said.

“We are now six weeks into the Covid-19 restrictions on movement, and it is clear that road usage levels have fallen significantly,” said Insurance Ireland chief executive Moyagh Murdock.

“While the duration of these restrictions is still uncertain and it is still too early to fully assess the financial impact on the motor insurance sector, but recognising the unique challenges in the Irish market, insurers have agreed to address the issue by signing up to a set of core principles,” she said.