Credit guarantee schemes have been introduced elsewhere in Europe 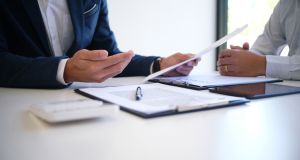 Germany and Switzerland have introduced schemes offering 100 per cent state guarantees for loans to SMEs to get through the coronavirus crisis and grow on the other side. Photograph: iStock

Investors in Irish banks, in which the Government holds large stakes, are nervous about the sector facing high levels of bad loans if it continues to lend to small businesses through the Covid-19 economic crisis without the types of credit guarantee schemes that have emerged elsewhere in Europe, according to Goodbody Stockbrokers.

The banks’ low market value – at less than 20 per cent of the value of their assets – also reflects a concern that the banks will be used to provide supports for SMEs such as potential equity investments and capital investments that Government officials have said are being considered, said Goodbody analyst Eamonn Hughes.

However, Mr Hughes said that comments by Central Bank governor Gabriel Makhlouf in a blog on Wednesday that the banking system is “on its own may be an insufficient source of liquidity” for SMEs is adding to speculation that credit guarantees, grants and other supports may be introduced soon. Mr Makhlouf said that the bank plans to soon publish research on potential funding needs of SMEs, which employ one million people in the Republic.

“In our view, the CB [Central Bank] is saying that SMEs are key to the recovery, but the banks won’t be able to do all of the heavy lifting on their own,” said Mr Hughes. “We suspect this means that there is more support going to have to be put in place for SMEs and we wonder if any new research from the CB on potential SME liquidity needs is a precursor to actions.”

The Department of Expenditure and Reform secretary general Robert Watt signalled last week that Government is looking at enhanced SME guarantee schemes, open-ended grants, and cases for equity capital support as it plans for the next stage in the economic battle.

Countries such as Germany and Switzerland have introduced schemes offering 100 per cent state guarantees for loans to SMEs to get through the coronavirus crisis and grow on the other side. In the UK, chancellor of the exchequer Rishi Sunak is facing pressure from the opposition Labour Party to extend his scheme that guarantees 80 per cent of so-called coronavirus business interruption loans provided by banks and other lenders to SME, to 100 per cent.

Stockbroking firm Davy said in a report earlier this week that a new credit guarantee scheme to support business would be a “prerequisite for confidence to return”.

“Guarantees in an Irish context are approached with a large degree of scepticism – not necessarily an unreasonable position to take given our past history with such tools. However, the nature and impact of the pandemic mean that real consideration should be given to the introduction of a credit guarantee scheme,” it said.

The broker stressed that while an existing guarantee scheme is available through the Strategic Banking Corporation of Ireland, it is both restrictive and time consuming.

It said that to deal with liabilities, a credit guarantee scheme should be considered which could provide medium-term loans to SMEs at low cost, allowing the discharge of liabilities and enabling the State to collect the outstanding tax and rates due from companies.