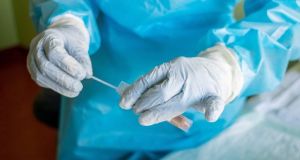 A medial worker holds a swab sample of a test for coronavirus. Photograph: Francesca Volpi/Bloomberg

The Northern Ireland Executive has decided to lift restrictions on access to graveyards during the Covid-19 pandemic.

In a press conference on Friday afternoon, First Minister Arlene Foster made the announcement, after considerable pressure from sections of the public and religious leaders. She said the North’s Chief Medical and Chief Scientific officers had said it was a “proportionate and low risk amendment”.

Comprehensive weekly figures published on Friday by the Northern Ireland Statistics & Research Agency (Nisra) indicated up to the week ending Friday, April 17th, there had been 276 Covid-19 related deaths, in hospitals, care homes and other premises in the North.

The Public Health Agency (PHA), which provides daily updates of predominantly hospital deaths, said the toll by the same date was 212.

The PHA said on Friday that 15 further people had died since Thursday, bringing its total reported death figures up to April 24th to 278.

At the press conference, Ms Foster asked people to “heed advice” on going out in public, to respect the 2m social distancing rule, and to wash hands thoroughly.

It continues to be the case that wakes should not be held, funerals should be in private with a maximum of 10 people, and there should be no gatherings after funerals.

She described it as “a matter of life and death” and urged people to listen to funeral directors.

She further urged the public to follow all the guidelines in place at present in an effort to suppress the virus.

“We are not out of the woods,” she said. “Making a quick dash for the exit would be a mistake.”

She added that “social distancing will be with us a long time”.

Deputy First Minister Michelle O’Neill said the Executive was easing the restrictions after considering the mental health implications of keeping cemeteries closed and after feedback from the public and others. She said the Executive had “recognised the comfort of visiting graveyards”.

The first ministers offered their condolences to DUP politicians Jeffrey Donaldson and Edwin Poots, whose elderly fathers both died this week, and to Sinn Féin’s Oliver McMullan on the death of his 22-year-old daughter Tierna.

Ms O’Neill said Tierna was: “A beautiful wee star who would light up your day.”

She said “life as we know it has changed” for a couple of years if not beyond that. “The virus is still here and not going away any time soon,” she said.

She added that now was “not the time to talk about an exit strategy”.

The 96 deaths in care homes and hospices involved 44 separate establishments, the statement said.

The comparative number of deaths reported daily by the Public Health Agency (PHA) to April 17th was 212.

The provisional number of total deaths registered in Northern Ireland in the week ending April 17th was 424, 11 fewer than the week before, but 134 more than the five-year average of 290.

A total of 101 (23.8 per cent) of these deaths mentioned Covid-19 on the death certificate, bringing the total number of Covid-19 related deaths registered to 242.

Over the last three weeks in total, 410 “excess deaths” — deaths above the average for the corresponding week in previous years — have been registered in Northern Ireland.

Males accounted for about half (49 per cent) of all registered deaths in the calendar year 2020 to April 17th and slightly more than half (54.1per cent) of the 242 Covid-19 related deaths registered over the same period.

The number and proportion of respiratory deaths is lower in the year-to-date than the five-year average of 1,613 (31.7 per cent).

PHA daily figures cover the number of deaths reported to it where the deceased had a positive test for Covid-19 and died within 28 days, whether or not Covid-19 was the cause of death.

The PHA figures may not capture all deaths that occur outside hospital.

The Nisra weekly provisional death statistics, are based on death registration information collected by the General Register Office, count all deaths where Covid-19 was mentioned on the death certificate by the doctor who certified the death, whether or not Covid-19 was the primary underlying cause of death.

The figures include cases where the doctor noted that there was suspected or probable coronavirus infection involved in the death.

As a result the weekly totals will usually be higher than the relevant daily figures — because the DoH daily updates only include those who have tested positive for the virus.

1 Tributes paid as boy (15) who fell from Powerscourt Waterfall named
2 How a ship abandoned by its owner brought deadly cargo to Beirut
3 Covid-19 may spread more easily in schools than thought, US report warns
4 Coronavirus: Community transmission picking up pace as only eight counties see no increase in cases
5 Show us the evidence that pubs spread Covid-19, says Government TD
Real news has value SUBSCRIBE