Barclays’ Irish operation will be the biggest bank in the Republic 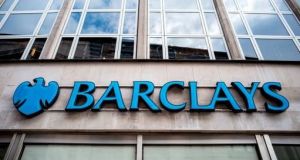 Barclays said in 2018 it expected Barclays Bank Ireland to ultimately hold €255bn of assets as the unit is used as a hub to maintain access to clients across the EU after Brexit. Photograph: Getty Images

Newly-filed accounts for Barclays Bank Ireland, which is referred to internally as Barclays Europe, also show that its UK parent injected €1.64 billion of equity into its business to boost its reserves and support its exponential growth.

The unit’s employee base rose to 1,563 from 912 as it absorbed branches across the EU, including France, Spain and the Netherlands. That is in addition to a German business that transferred in late 2018. Some 260 of the employees are based in Dublin.

Barclays said in 2018 that it expected Barclays Bank Ireland to ultimately hold £224 billion (€255bn) of assets as the unit is used as a hub to maintain access to clients across the EU after Brexit. Asset and liability transfers are ongoing, and will continue during and after the Brexit transition period, which is currently scheduled to run to the end of 2020.

The planned scale of the Irish operation will make it the biggest bank in the Republic by balance sheet size, and has brought it under the direct supervision of the European Central Bank.

The 2019 accounts for Barclays Bank Ireland give the first overview of the type of business being transferred from the UK. Some €27.3 billion of the assets are comprised of financial derivatives. These are financial contracts between two parties linked to the future value or status of an underlying asset, such as shares, commodities or interest rates.

Most of the derivatives on the Irish balance sheet comprise contracts related to interest rates and foreign exchange rates. The company also has €27.1 billion of derivatives liabilities.

The bank’s loan book size grew to €13 billion by December 31st from €4.9 billion a year earlier. Profit before tax more than tripled to €76 million as a result of the migration of business from the UK.

“The bank is monitoring the potential downside risk associated with both the direct and indirect impact of the Covid-19 outbreak,” the report said.