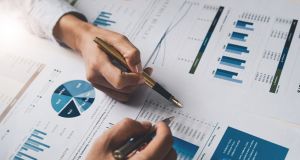 Deloitte is the only “Big Four” accountancy firm operating in Ireland that has committed to retaining its staff throughout the Covid-19 crisis, though the firm’s partners have taken pay cuts.

Deloitte’s position contrasts with that of rivals PwC, EY and KPMG, as none have made a public commitment to retain staff or confirmed if their highest paid partners would take salary cuts.

The UK arms of the firms have reduced the amount of profits distributed to their partners each month by between 20 and 25 per cent.

Deloitte said: “Our goal with regard to the current situation is to protect all of our people and their livelihoods so the partners, as the owners of the business, have been the first to bear the impact of any economic downturn in our business.”

The firm added that no other pay cuts have been implemented and that it would not be furloughing staff in the Republic, although it has offered a part-paid sabbatical to offer flexibility to some staff.

The four biggest accountancy firms were asked by The Irish Times if their partners would take pay cuts, whether staff would be furloughed, if their autumn graduate programmes would continue as planned, and if they were availing of the Government’s wage subsidy.

In response, EY said it is still examining the impact the crisis will have on its business “and will communicate our decisions on the matters you raise in due course.”

PwC made no comment in response to the questions. PwC’s UK arm said last week that partners there would take a 20 per cent pay cut.

KPMG said it is keeping issues of remuneration, headcount and recruitment under constant review.

“Our priority is and will remain supporting all of our people and our clients to the best of our ability through these very challenging times and into the recovery,” its managing partner, Séamus Hand, said.

He said that no decisions had yet been taken on whether the company would avail of the Government’s temporary wage subsidy scheme. And he added that the company’s graduate recruitment programme is expected to progress this autumn. Deloitte also said it is planning for its graduate intake programme in 2020 to go ahead.

The status of new graduate programmes at EY and PwC is unclear.

EY’s UK and Ireland chairman has said partner salaries will be cut by 20 per cent, noting that reducing partner profit distributions is a prudent move in this time of economic uncertainty.

Among smaller firms, Grant Thornton said it is not currently making use of any Government subsidies nor is it furloughing any of its 1,450 staff in Ireland. It declined to comment on whether any partners or staff had taken pay cuts. In the UK, Grant Thornton said it may be forced to furlough staff after just 150 of its 4,500 employees agreed to reduce their hours and pay by up to 40 per cent, the Financial Times reported. Its partners have agreed to take a pay cut “when we need to”, the newspaper reported.

Mid-tier firm BDO would not say if staff would be furloughed and did not confirm if partners would take pay cuts. It said any decisions would be guided by its responsibilities to “our people and our clients”. In the UK, BDO announced it has furloughed all of its first-year trainees, apprentices and some support staff – around 700 employees – and said monthly payments to partners would be cut by up to 25 per cent until the end of the year.

Mazars did not respond to a request for comment. In the UK its sister company has furloughed 200 staff.

Industry sources said smaller firms, which tend to focus on consultancy and advisory work over audit, are in a very challenging space but couldn’t give insight into the commercial viability of those firms.