Irish fintech start-up Flender gets clearance to launch in UK 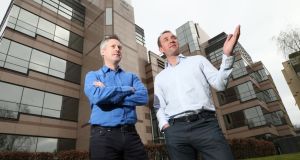 Flender co-founders Oli Cavanagh and Kristjan Koik: “The UK market is 300 times bigger than Ireland and you can’t really even open your doors for business unless you have FCA authorisation,” said Mr Cavanagh.

Dublin-headquartered fintech start-up Flender is looking to raise €1 million in funding after receiving full authorisation from the UK financial regulator to operate in Britain.

The online lender, which has developed a peer-to-peer (P2P) lending platform for use by both consumers and SMEs, recently went live with a soft launch in Ireland.

It now intends to roll out its platform in the UK after being granted approval by the Financial Conduct Authority (FCA) last week to provide regulated products and services there.

The “friendly crowd finance” company was established by technology entrepreneurs Kristjan Koik, Oli Cavanagh and Jeremy Davies in October 2014. It enables businesses and consumers to lend and borrow money through an app that links in with social network connections.

There are no lender’s fees attached, unlike most platforms, but there is a success fee and what the company calls “a small interest margin”, with rates on currently listed loans ranging from 8.1 per cent to just over 10 per cent.

The company has previously raised about €1 million from investors that include former EY Entrepreneur of the Year winner Mark Roden, who is the founder of Irish mobile payments company Ding. Also onboard as an investor and as the company’s chairman is Philip Grant, who started the accountancy practice RSM Farrell Grant Sparks, which merged with Grant Thornton in 2015.

Monies raised by the start-up so far include more than €500,000 through a campaign held on the crowdfunding platform Seedrs earlier this year that attracted over 230 investors.

The volume of P2P lending in Ireland was estimated at about €11 million last year compared to £3 billion in the UK in what is a much more mature market. Mr Cavanagh, who serves as the company’s sales director, said FCA approval is a game-changer for Flender.

“The UK market is 300 times bigger than Ireland and you can’t really even open your doors for business unless you have FCA authorisation. It has taken us two years to get the approval and we’re aware of many bigger companies who have tried and failed so it is a great achievement,” he told The Irish Times.

“All of the investment we have received previously was based on us operating in Ireland but now we’re able to launch tomorrow in the UK, although it will take a bit longer than that as we need to build up a team first,” Mr Cavanagh added.

He said the company, which announced plans to take on more than 20 people last December, will likely increase headcount further in the coming months.

“Flender, which is currently the only consumer P2P lender locally, will continue to operate most back-office operations in Ireland so we’ll be looking to build that up, as well as increasing marketing and sales, but we will be hiring people on the ground over there as well,” said Mr Cavanagh.

“Basically, we are looking at going on a hiring spree, bringing in some new equity investment and preferred lenders, and going crazy in the UK. We reckon it should be pretty easy to raise more funding given the authorisation,” he added.

Mr Cavanagh said while crowdfunding was one option, and was particularly useful in terms of marketing, it was also as much, if not more, work as trying to raise funds from smaller groups of people.

Flender, which is based in Ballsbridge, said it had enjoyed phenomenal success since launching the platform in Ireland earlier this year.

“We are struggling to keep up with demand from SMEs. We’ve really exceeded expectations here,” said Mr Cavanagh.

“We’ve loan demand for about €4 million in the last seven or eight weeks, which is way above what we anticipated and shows there is definitely room for us in Ireland,” he added.