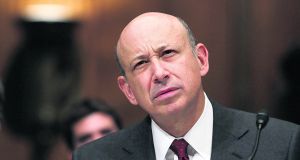 London’s progress as a financial centre could stall because of the upheaval Brexit will bring to the industry, Goldman Sachs chief executive officer Lloyd Blankfein was quoted as saying by the BBC.

When asked whether London’s long-term expansion over the past three decades would go into reverse, Blankfein said: “I don’t think it will totally reverse.”

“It will stall, it might backtrack a bit, it just depends on a lot of things about which we are uncertain and I know there isn’t certainty at the moment,” Blankfein said, according to a report on the BBC website.

Most of the European Union’s financial markets are currently run out of London, but banks have warned some of that business and the jobs that come with it will have to move if they lose access to the bloc’s single market.

Goldman’s chief executive said he would like to see an implementation period of at least “a couple of years” once the British exit deal is agreed, so that banks can have time to adapt.

The bank has “contingency plans” to move people depending on the outcome of the negotiations, he said.

The head of Goldman’s international business, Richard Gnodde, warned on March 21st that the bank would begin moving hundreds of people out of London before any Brexit deal is struck between Britain and the EU.

Blankfein said the bank wants to avoid cutting as many jobs as it can, adding that in 10 years’ time it was likely that London would remain its largest European office by a substantial margin.

“I would say that it is our hope that we will be able to conduct our business as close as we can to the way we conduct it today,” he said.

“That is, we could have German nationals marketing German securities to German investors from the UK.

“And be resident in the UK and accomplish that. I would like and it is my hope that we can do as much of that as possible.”

The European Union is expected to publish a draft law next month that could be the prelude to forcing the clearing of euro-denominated securities out of Britain.

Currently vast swathes of euro transactions are processed by clearing houses in London due to its status as a global financial centre. The euro zone has long wanted more control of that business, and Britain’s decision to leave the EU has provided a new impetus.

Blankfein told the BBC it was important to guard against any rapid changes or fragmentation of financial activity, saying it could risk the safety and security of the financial system.