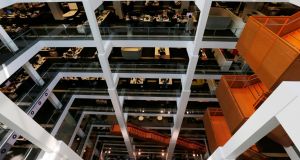 Australian investment bank Macquarie is reported to be seeking a full banking licence in Ireland as it seeks to retain access to passporting rights across the EU following Brexit.

It comes just days after it was revealed that JP Morgan is to shift hundreds of back-office jobs to Dublin from London.

Macquarie, which has staff in 11 European cities, including Dublin, Frankfurt and Paris, on Friday announced record annual net profit due primarily to the impact of acquisitions and a strong performance from businesses such as its commodities and financial markets unit.

Annual net profit hit a record A$2.22 billion (€1.46bn), above Macquarie’s own guidance and analysts’ expectations of A$2.06 billion.

The Irish edition of the London Times reported on Friday that the bank, which is nicknamed the “vampire kangaroo,” is in the process of applying for a full banking licence from the Central Bank.

Barclays is also said to have picked Dublin as its future European base, which may involve the movement of 150 jobs from London to Dublin. Credit Suisse and Bank of America Merrill Lynch are also looking at expanding their existing operations in Ireland.

According to its latest results published on Friday, annuity-style businesses like funds management, which represent more than 70 per cent of Macquarie’s earnings, posted a 4 per cent earnings rise last year.

Income from the commodities and financial markets unit, part of the bank’s market-facing division, rose 12 per cent.

1 How long can Government afford to keep State pension age at 66?
2 PTSB plays down Ulster Bank talk as it sells €1.4bn of loans
3 Takeda selling off its Dunboyne facility
4 ‘It’s fantastic living here – in the gateway to Asia’
5 Disposable income in Ireland rose 28% between 2012 and 2019
6 Ghost newspapers and zombie brands are stalking the media
7 How much state pension will I get next year?
8 Smurfit Kappa fined €124m after Italian cartel investigation
9 Whistleblower warned EY of Wirecard fraud four years before collapse
10 Prime business district in Dublin has vacancy rate near 20%
Real news has value SUBSCRIBE