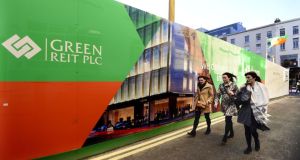 MaplesFS’s new 2,973sq m premises at 32 Molesworth Street in Dublin, which was developed by Green Reit, can accommodate about 250 workers.

MaplesFS, which provides administration and middle-office services for hedge funds and private-equity firms, plans to increase its Irish workforce by 60 per cent over the next five years as it moves to its new offices in central Dublin on Friday, according to a company spokeswoman.

While the spokeswoman declined to say how many people are currently employed in MaplesFS in Dublin, it is believed the number exceeds 100.

The wider Maples Group, which includes law firm Maples and Calder, previously disclosed to The Irish Times in January that it employs about 350 people in the capital, having almost doubled its workforce over the past four years.

MaplesFS’s new 2,973sq m (32,000sq ft) premises at 32 Molesworth Street in Dublin 2, which was recently developed by Dublin-listed property group Green Reit, would be capable of accommodating about 250 workers.

Green Reit said in December that it had agreed to rent out the entire property to an “international business provider” for €1.65 million a year, without naming the company.

“The new office makes us well positioned for continued strong growth in Ireland and underscores our commitment to investing in the resources necessary to support our clients and our employees,” Scott Somerville, chief executive of MaplesFS, said in a statement.

MaplesFS, which has been in Ireland for the past decade, previously had office space in Beaux Lane House at the back of Stephen’s Green Shopping Centre. Maples and Calder, meanwhile, has offices at 75 St Stephen’s Green.

Demand for fund administration services in Ireland is expected to increase in the coming years as UK-based funds move to re-domicile their fund ranges to places such as Dublin and Luxembourg in the European Union to be able to continue to market to EU investors. More than $2 trillion of global fund assets are currently domiciled in Ireland in an industry that employs about 14,000 people.