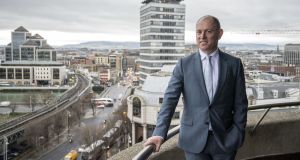 Irish Life contributed €54 million in profit to the first-quarter earnings of its listed Canadian parent company, Great-West Lifeco. This represented a 44 per cent increase on a year earlier.

Irish Life chief executive David Harney said this strong performance was due, in part, to the inclusion of Irish Life Health’s contribution for the first time in the quarter, and the continued success of its multi-asset investment strategies (MAPS).

“We have seen increased investment across Irish Life’s pension, investment and savings plans as investors return to the market,” he said.

“There is now over €9 billion invested in our multi-asset strategies including €2.5 billion by retail investors. Over the last 12 months the number of individual investors has grown by over 40 per cent to 46,000 and the total value invested in Irish Life MAPS has increased by 70 per cent.”

In its earnings release, Great-West Lifeco said the integration of Irish Life Health continues to progress. At the end of March, the company had achieved €5 million of “annualised synergies” to date and was “on track” to achieve targeted annual pretax cost savings of €16 million within the next nine months.

Irish Life entered the health insurance sector here last year following its acquisition of Aviva Health and the shares in GloHealth that it didn’t already own. The businesses were merged under the Irish Life Health brand, leaving it with a 21 per cent share of the market.

In addition, Great-West Lifeco said its subsidiary Irish Life Assurance plc redeemed its 5.25 per cent €200 million subordinated debenture notes at their principal amount together with accrued interest during the quarter.