The bank’s CET1 ratio was some 0.5% higher than expected 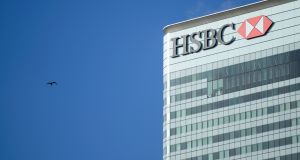 HSBC said pre-tax profit for the first three months of the year fell to $5 billion, down from $6.1 billion a year ago. Photograph: Getty Images

HSBC Holdings on Thursday reported better than expected first-quarter profits and capital position, boosting the lender’s share price in Hong Kong as the bank seeks to move from restructuring to growth.

The bank’s common equity tier 1 ratio – a key measure of its financial strength – was 14.3 per cent at the end of the March quarter, up from 11.9 per cent in the same period last year and better than the 13.7 per cent expected by analysts.

HSBC’s shares rose 2 per cent in Hong Kong following the announcement, outperforming a 0.5 per cent drop in the benchmark Hang Seng index.

HSBC chief financial officer Iain Mackay ruled out a fresh share buy-back in the short term as a means of using some of that excess capital, after the bank said it completed its previously announced $1 billion (€918 million) share buy-back in April.

“We’ve just finished one, we need to catch our breath a little bit,” Mackay told Reuters on Thursday.

Mackay also reiterated the bank’s stance that it will hold its dividend steady for now, quashing shareholders’ hopes that the lender’s robust capital levels would see it boost payouts.

HSBC is expected to receive a further capital boost as it repatriates some $8 billion currently stuck in its US subsidiary, following approval by the Federal Reserve last year of its plans to begin the process.

“With a strong capital position, we won’t be surprised if the bank announces another share buy-back in the second half,” Bernstein analyst Chirantan Barua said in a research note following the results announcement.

HSBC said pretax profit for the first three months of the year fell to $5 billion (€4.6bn), down from $6.1 billion a year ago but better than the $4.3 billion expected on average by analysts according to the bank’s own survey.

The profit decline was due to a change in the accounting treatment of the fair value on its debt and because its year-ago earnings included the operating results of the Brazil business that it sold in July, HSBC said.

Revenue in the quarter dropped 13 per cent to $13 billion.

However, the bank’s adjusted profit before tax, excluding the exceptional items, rose 12 per cent in the quarter to $5.9 billion.

Shareholders at the bank’s annual general meeting last week overwhelmingly voted in favour of re-electing chief executive Stuart Gulliver to the lender’s board, in an affirmation of his strategy in recent years to shrink and refocus the bank.

Mr Gulliver and outgoing chairman Douglas Flint have sought to unwind much of the empire-building of their predecessors since their appointments in 2010 – a response to a tough environment of low interest rates and increased regulation.

In the first quarter HSBC said it had increased customer lending by 17 per cent over the same period last year and assets under management by 15 per cent in China’s Pearl River Delta, a key plank of the management duo’s strategy to refocus on Asia.

China’s slower than expected growth has caused the lender to expand more cautiously than planned in the booming southern region of China.