How Germany got its gold back

It was kept abroad to escape the Soviet Union. But then Germany decided to bring it home 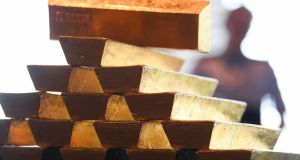 When Carl-Ludwig Thiele was 11, his aunt gave him a 21-carat gold coin as a gift. “It was an incredible feeling to own it. I still have it now and can picture it. There is an image of Pope John XXIII on one side, and on the reverse an image of the Holy Ghost floating above the bishops.”

In the five decades since receiving that coin, Mr Thiele - tall and forthright with a liveliness in his face when the subject switches to bullion - has risen high in Germany’s state bureaucracy. He served 20 years in parliament before making the switch from Berlin to Frankfurt to sit on the executive board of the Bundesbank, the country’s central bank and custodian of its gold.

Today, Germany is one of the biggest holders of gold in the world: it owns 3,378 tonnes, worth €119bn, second only to the US. But until recently, most of that gold was stored in New York, London and Paris. When the country decided to bring half of its gold back home, Mr Thiele was put in charge.

Over the past five years, he has masterminded the transportation of almost 54,000 gold bars - each with a value of just under $510,000 - to Frankfurt, Germany’s financial capital, moving $27bn (in today’s prices) from the vaults of the US Federal Reserve and the Banque de France. The last bars arrived at the Bundesbank’s headquarters, a few kilometres north of Frankfurt’s city centre, in August. But how Germany’s gold came to be abroad is a story that goes back to the second world war and beyond.

Germany has a stronger relationship with gold than most nations. The country’s experience with hyperinflation between 1919 and 1923, during the years of the Weimar Republic, is ingrained in the national consciousness. Gold, above all, stands for stability.

During the second world war, Nazi Germany looted gold from central banks across Europe. The Reichsbank stored more than 3,700kg (4.1t) of this stolen gold through the Bank for International Settlements in Switzerland. By the time the Allies, through the Tripartite Commission for the Restitution of Monetary Gold, recovered it in 1948, Germany’s state coffers were bare.

It was during the Wirtschaftswunder - the economic miracle of the 1950s and 1960s - that West Germany began to stockpile large amounts of gold. The country’s export surpluses meant businesses were flush with dollars, which were swapped at the central bank - initially the Bank deutscher Länder, then, from 1957, its successor the Bundesbank - in return for Deutschmarks. Under the Bretton Woods system of fixed exchange rates that then underpinned global finance, the Bundesbank could use the dollars to purchase gold at the rate of $35 an ounce, storing most of its holdings in the New York Fed’s underground stores on Liberty Street. In 2012, just before the move began, just over 1,500 tonnes of German gold was stored there.

During the cold war, the threat came from the east, so it made sense to store it further west, in Paris, London or New York"

Frankfurt was not much more than 100km from the border with Soviet-controlled East Germany, so with the threat of Russian invasion, West Germany kept bullion built up before the collapse of Bretton Woods in the early 1970s abroad. “During the cold war, the threat came from the east, so it made sense to store it further west, in Paris, London or New York,” says Mr Thiele. After the fall of the Berlin Wall in 1989 and the collapse of the Soviet Union in 1991, that rationale disappeared.

It was another decade before the Bundesbank began to repatriate its gold, however. In the early years of the new millennium, it moved 930 tonnes, worth about $40bn today, from the vaults beneath the Bank of England’s Threadneedle Street base in the City of London back to Frankfurt, after the Bank increased its rents. That move, shrouded in secrecy owing to security concerns, came as pressure mounted on the Bundesbank to reveal more about the nation’s reserves.

Ten years later, the Bundesrechnungshof, Germany’s federal accounting office, and members of the German parliament, the Bundestag, began asking questions about the country’s gold. Lawmakers wanted to know where the gold was stored, calling on the central bank to provide an inventory of the bars in its possession.

More controversial was a public campaign spearheaded by Peter Boehringer, a former asset manager who earlier this year became a member of parliament representing the Eurosceptic Alternative for Germany (AfD) party. “Initially we weren’t taken seriously. We wrote to the Bundesbank, but we got standardised, worthless answers. We didn’t get any answers, so we had to go public,” Mr Boehringer says. “We had attention from online media, then the international media. We are the owners; we’re talking about €100bn of public assets.”

Mr Boehringer believes that Germany needs its gold back for more than symbolic reasons. The European Central Bank’s aggressive response to the global financial crisis has, he says, made cash worthless. “People are always interested in gold, but we live in a time when central banks are running amok. In 1971, all currencies were linked to gold. That’s no longer the case, and the behaviour of central banks is ridiculous. More and more people can see that.”

The Bundesbank denies that Mr Boehringer’s campaign spurred its decision to bring the gold home. It also denies accusations by gold bugs (those bullish on gold as a commodity) that the German gold has disappeared from the New York Fed’s vaults. Mr Thiele says he has seen it twice, in 2012 and 2014. “It is there. And it was never a problem to see it or have it transported to Germany.”

Gold’s appeal has risen in tandem with turmoil throughout history. Many economists agree with John Maynard Keynes’ attack on linking gold and paper money as a “barbarous relic” of a bygone era. The link was abandoned in the 1970s, when the Bretton Woods system ended. Some nations have sold much of their gold since.

Yet when markets become choppy or heads of state turn warmongers, bullion lures back investors. During the most recent global financial crisis, the price rose from around $650 an ounce in the spring of 2007 to a peak of more than $1,800 in summer 2011.

Other central banks have reacted to unrest by storing gold abroad, too, although their methods of transportation have, in many instances, created considerable risk. During the first week of July 1940, the Bank of England had gold worth £200m ($18bn in today’s prices, according to the World Gold Council) on liners in transit over the Atlantic. If any of those ships had sunk, the Bank would not have received a penny in return for the loss of almost 41,000 bars, because the shipments were irreplaceable and thus uninsurable.

Where the gold is stored

In January 2013, the Bundesbank revealed where its gold was stored and announced the plan to move half of it home. The bank has refused to divulge how the 53,780 bars were transferred, but bullion transportation has moved on from the era of ocean liners.

People familiar with the field say it was most likely that the gold was flown from Paris and New York back to Frankfurt. Road transportation may have been tried but is unlikely to have been used frequently. Moving the gold 600km from the Banque de France’s vaults in the middle of Paris to the Bundesbank would put drivers at risk, and the bars are often too heavy to be moved in substantial volumes. While a bar of gold takes up less space than a litre of liquid, each weighs about 12.5kg.

Once the Bundesbank had decided to move its gold, lawyers then had to scour contracts to insure it against being lost in transit. Many insurers pay out only in dollars, rather than the precious metal, potentially leaving the central bank on the hook if the price of gold were to rise between the contract being signed and the bullion arriving safely in the Bundesbank’s vaults.

More than 4,400 bars transferred from New York were taken to Switzerland, where two smelters remoulded the bullion into bars that meet London Good Delivery standards for ease of handling. The London market requires gold bars to look as they do on the silver screen - the technical name for the shape is a trapezoid prism - as their sloping edges make the bars easier to pick up than New York bars, which are shaped like simpler-to-store bricks.

The whole exercise cost €7.6m. All of the bars returned from both New York and Paris were checked by an in-house team of between five and eight people. The team assessed the purity using X-ray techniques, and by weighing the bars. In October 2015, the bank published a list (since updated annually) with specific details of all of the gold it held. The gold still abroad is in London - the world’s biggest bullion market - and New York, which remains an important location because of the US dollar’s status as a global reserve currency. Germany currently has no plans to repatriate it.

It is a sunny day in late October and light streams through the large windows of a room on the Bundesbank’s executive floor. The views stretch across the city’s skyline and beyond to the forests that surround the south of the city. But my attention is fixed on the five gold bars before me.

Together they are worth €2.2m, and I imagine all the fun - the exquisite food, the plush properties, the lavish holidays - one could buy with that or the jewellery one could make. It seems a shame to keep the wealth locked up, out of sight, in a form no one will use. Yet these bars - each with slight differences in shape and weight, some dating back to the 1950s - hold an allure.

Mr Thiele remarks on the attention that surrounded the operation. When the move was completed earlier this year, it made front-page headlines and filled prime slots on evening news broadcasts. “There is a lot of public interest,” he says, with some understatement.

It is a strange sensation to pick up gold for the first time. The surfaces of the Bundesbank’s bars are unpolished, each with its own distinct branding and scratches - signs of the metal’s malleability. Its colour gives it a certain appeal, but it is not until you feel the weight of it - the bars are hard to hold for more than a few seconds - that you begin to understand why.

According to the pictures, the walls and shelves of the Bundesbank’s vaults are grey, in keeping with the design of the headquarters, a Brutalist 13-storey concrete slab built long and narrow like a ship. But we are denied access and the gold will remain out of public view - a decision that Mr Thiele acknowledges will fuel suspicions about whether half of Germany’s gold has really come home.