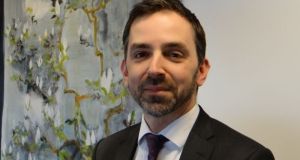 Central Bank deputy governor Ed Sibley: expects “all the main banks to be subject to Central Bank enforcement investigations” over the tracker-mortgage scandal

The Central Bank is preparing to start an enforcement investigation into AIB as part of an industry-wide examination of overcharging of tracker mortgage borrowers going back almost a decade.

In a speech at an event in Dublin on Tuesday, Central Bank deputy governor Ed Sibley said that he expects “all the main banks to be subject to Central Bank enforcement investigations” in relation to the tracker-mortgage scandal.

AIB is alone among the five main lenders - also including Bank of Ireland, Ulster Bank, Permanent TSB and KBC Bank Ireland - not subject to an enforcement investigation.

“As part of these investigations, interviews with relevant individuals have been and will be conducted, and large volumes of documentation have been and will continue to be gathered and reviewed,” Mr Sibley said at the conference, organised by law firm Eversheds Sutherland.

“Moreover, I expect the boards, the individuals on the boards and the executives to be accountable and to be held to account for not only the initial decisions which started the consumer detriment, but the persistent and ongoing behaviours and decisions that magnified this harm over an extended period.”

A spokesman for AIB said that the bank is not currently in enforcement and has not been made aware of any enforcement investigations related to the tracker review programme.

“AIB has undertaken a review of customers’ mortgage accounts in relation to tracker interest rates,” he said. “The review is ongoing, and is subject to continuous engagement with the Central Bank to ensure that it is conducted in line with the framework.”

A spokesman for the Central Bank declined to comment.

AIB has set aside as much as €190 million to deal with refunds, compensation and legal and professional costs linked to the tracker mortgage review. As of the end of October, the bank has acknowledged as many as 3,586 cases of customers who were wrongly denied contractual rights to cheap tracker mortgages linked to the European Central Bank (ECB) benchmark.

Up to a further 1,016 customers were on a higher rate than they should have been on.