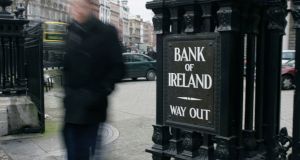 File Photo Bank of Ireland said today thatÊcustomers will soon no longer be able to withdraw less than 700 euro or lodge less than 3,000 euro at the counter in some of its branches.ÊInstead, customers will have to use ATMs or electronic banking. 21/11/2008. Banks Crisis. The Bank of Ireland has reported that it has had 'unsolicited approaches' from a number of parties interested in investing in the bank. Photo: Mark Stedman/RollingNews.ie

The Central Bank has forced Bank of Ireland to include an additional 6,000 customers in its tracker mortgage compensation scheme. The extra customers bring the total number due for compensation from the bank to 10,300, by far the most identified by any lender under review. Eoin Burke-Kennedy has the details.

Aryzta, the Irish-Swiss food group chaired by Gary McGann, has said that a newly selected non-executive director who is the subject of an insider trading investigation, is not going to stand for election by shareholders to the board. The company announced the appointment of Juergen Steinemann in August, as part of Mr McGann’s efforts to renew Aryzta’s board.

Barry O’Halloran reports on the story of Kerry-born businessman Donal O’Sullivan, whose US building firm has sought bankruptcy protection after a New York Court recently ruled it should pay $76 million to a number of trade unions following a three-year legal battle.

In the latest from the Paradise Papers Mark Paul reports how the owners of the Jervis Street shopping centre shifted its control in 2013 to an Isle of Man offshore structure that was designed specifically to ensure Irish tax authorities were not ranked ahead of its banks in the queue for repayment.

In Agenda, Mark traces the Isle of Man links with the Dublin shopping centre, on target for a €400 million valuation and the jewel in Paddy McKillen’s crown. Meanwhile, six major multinational firms, including Apple and Google, are to be asked to come before the Public Accounts Committee next year to discuss corporation tax in Ireland in light of the Paradise Papers release.

In his Caveat column, Mark Paul explains how moral outrage won’t end tax avoidance, only changes to the rules will do that.

TV3 could be rebranded using the name of its parent company Virgin Media. The details emerge in an exclusive interview with Virgin Media Ireland’s chief executive Tony Hanway.

Finally, in the in the World of Work this week, ex-Ireland rugby international Bob Casey talks about departing the sporting worldfor a role in executive searches.