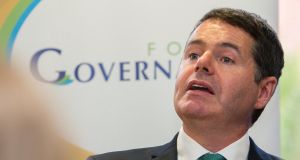 Minister for Finance Paschal Donohoe said he cannot commit at this stage to the introduction of a vacant property tax because of the legal and social complexities involved.

He said that more than a third of the 183,000 properties currently classified as vacant in the State were owned by elderly people “pointing to all kinds of reasons why those properties might not be used”.

Appearing before the select committee on finance to consider the Finance Bill, Mr Donohoe said questions about how many homes are vacant; why they are vacant; and who owns them needed to answered before such a tax could be introduced.

He was responding to criticism from Sinn Féin’s Pearse Doherty, who claimed the Government was dragging its heels on the matter when the State needed to wield a stick to investors sitting on vacant properties.

“It’s immoral that we have so many vacant houses at a time of huge crisis with more than 3,000 children in emergency accommodation . . . and with people dying on the streets from homelessness,” Mr Doherty said.

He also claimed there was no legal impediment to applying a tax on a category of homes, noting the Government introduced a similar measure on holiday homes in 2010.

Figures from Census 2016 show there are 183,000 units, excluding holiday homes, vacant across the State, with up to 90,000 located in urban areas, where demand for housing is most acute.

The Government has committed to examining the issue ahead of Budget 2019 and is seeking advice from the Attorney General.

Mr Donohoe was also forced into defending the Government’s controversial help-to-buy scheme for first-time house buyers amid a sustained attack from Opposition politicians, who claimed it was merely fuelling further property price inflation and was a sop to developers.

Mr Donohoe, however, said it was too premature to consider the full impact of the scheme, which offers tax rebates of up to €20,000 to first-time buyers, and whether it was having the required supply-side effect.

He said so far just 4,487 applicants had accessed the scheme and this was not enough for anybody to claim it is “shifting the needle in terms of pricing levels”.

Mr Donohoe said an independent review of the scheme showed 53 per cent of the claims made under the scheme were against properties worth in the region of €300,000, which showed the measure was concentrated on increasing affordability at lower levels of the market.

“It is going to take longer than six to nine months to evaluate whether it is having a supply-side response and that’s the basis on which I will evaluate this scheme in the run-up to Budget 2019,” he said.

Separately Mr Donohoe said the Government’s new share scheme for SME employees will cost the exchequer about €10 million a year.

He said the key employee engagement programme (Keep) was a tax expenditure with a cost to the State but one that addressed a competitive failing.

Employees are currently liable to income tax, USC and PRSI when exercising their share options.

However, under the Government’s new scheme, they will now only be liable for capital gains tax at a rate of 33 per cent upon the sale of their shares, effectively allowing them pay the tax bill out of the proceeds.