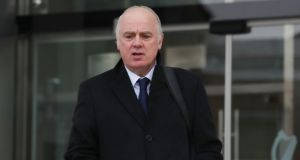 The trial of former Anglo Irish Bank chief executive David Drumm could last up to five months, a judge has been told.

The trial of Mr Drumm (51), which is due to start on January 10th next, will also require an extended jury panel of 15 people, Dublin Circuit Criminal Court heard.

Mr Drumm, with an address in Skerries, Co Dublin, faces two charges of conspiring to defraud depositors and investors at Anglo by “dishonestly” creating the impression that deposits in 2008 were €7.2 billion larger than they were. He faces one additional charge in relation to the EU transparency directive. He has yet to enter a plea to the charges.

The estimated duration of the trial currently stands at three months but the jury should be told they may be required for longer, prosecution barrister Paul O’Higgins SC told Judge Karen O’Connor.

“The jury will need to be told they should be free for five months maybe, so we’re not under terrific pressure,” he said.

Bernard Condon SC, defending, agreed that the jury should be told to be available for at least four months. He said he had no difficulty with the suggested five-month time frame. Mr Drumm was in court for the brief hearing.

Judge O’Connor adjourned the matter for a pre-trial mention on December 18th.