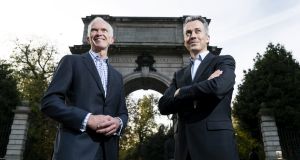 Business Growth Fund chief executive Stephen Welton and Leo Casey, head of BGF in the Republic, at the launch in Dublin of a €250 million fund for Irish SMEs.

The State’s sovereign development fund, AIB and Bank of Ireland have emerged as key backers of a new €250 million fund that aims to take equity stakes in Irish SMEs.

Set up by UK venture capital outfit Business Growth Fund (BGF), the new fund will provide initial investments of between €2 million and €10 million for a minority stake in Irish SMEs with “strong management teams”.

This would typically involve between €5 million and €100 million in annual revenues, BGF said in a statement.

The Irish Times reported in June that BGF had hired Leo Casey, then a senior executive with IBI Corporate Finance, to lead the Irish fund, which initially aimed to raise €200 million to invest.

The UK firm, led by chief executive Stephen Welton, was set up in 2011 by five of the country’s main banks – Barclays, HSBC, Lloyds Banking Group, Royal Bank of Scotland and Standard Chartered – in the wake of the financial crisis as an independent company to make up to £2.5 billion (€2.9 billion) of equity investments in SMEs.

Unlike private-equity firms, which typically seek a controlling stake in a business, and an exit within five to seven years, BGF’s so-called “patient capital” model permits long-term investments.

Aside from AIB, Bank of Ireland and the Ireland Strategic Investment Fund (ISIF), the new Irish fund is being backed by BGF’s existing investors, the company said.

Mr Casey’s initial team in Dublin will comprise David Gammie, who has worked with BGF in Scotland for more than four years; Maedhbh O’Driscoll, previously of Deloitte’s corporate finance department in Dublin; and Joe Higgins, who has worked in the past with investment firm MML Capital Partners in Dublin and AIB’s unit for resolving troubled corporate loans.

“There are many businesses across Ireland that can benefit from the type of long-term capital that BGF provides,” Mr Casey said. “Over the past 20 years I have worked with many diverse companies here – from family-run firms to high-tech innovators and professional services companies – and many share the same aspirations to grow their company without losing control.”

Eugene O’Callaghan, director of ISIF, said: “The patient equity funding that BGF provides will address a significant gap in the funding landscape for Irish SMEs. Judging by BGF’s success in the UK, we expect that it will attract significant interest from Irish entrepreneurs and family businesses.”