Have we learned nothing from the Worldspreads scandal? 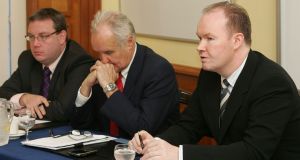 On December 24th, while the rest of us were hanging up our Christmas stockings, the Companies Registration Office was stamping as “received” the final documents from liquidator George Maloney for the wind-up of financial spread-betting company Worldspreads. And what a wind-up that whole saga was. The Dublin-based, London-listed group collapsed in 2012 with more than £13 million of its clients’ money missing.

If it had happened in any other era, the Worldspreads affair would be recalled as one of the most egregious financial scandals in Irish corporate history – the finance chief of a publicly listed financial group, which had a board full of business and political luminaries, admitted diddling its books for years. It was shocking.

Yet, the fact that it happened as Ireland was dealing with the fallout from proportionally the greatest banking collapse in history means that Worldspreads, as bad as it was, tends to get relegated down the list of post-crash painful memories.

The case is now almost closed.

The Worldspreads group collapsed with debts of £32 million, although most of this was dealt with via a KPMG administration of its regulated UK entity. Creditors got less than 1 per cent of their cash back in 2017.

Maloney’s records of the Dublin-headquartered PLC’s final meeting on December 18th show it finished with assets of just €567.72, which was eaten up in fees. A related company that he is also liquidating, Worldspreads International, had about €25,000 left on its books, This, too, was disbursed in various official payments.

Most of the Irish financial regulatory system appears to have ignored what happened at Worldspreads, and a separate scandal at a related Irish-based business, Marketspreads. This was spun off by Worldspreads to unsuspecting investors with overstated profits. A sum of €1.4 million was later secretly diverted by former Worldspreads executives from the spun-off business to another company.

There has been little or no investigation in this State of what actually happened in the whole, sorry affair. Despite the clear evidence of financial irregularities, no cases over the issues at Worldspreads or Marketspreads were ever taken by the Office of the Director of Corporate Enforcement or the Central Bank against any individuals, and nobody was restricted as a director.

Though authorities in the UK designated what happened at Worldspreads as a “serious market abuse”, the only regulatory ripple in Ireland is that Niall O’Kelly, the chief financial officer who admitted cooking the books, last year received a 12-month suspension as a member of Chartered Accountants Ireland. He was also fined about £11,000 in the UK and banned from involvement there with regulated entities.

What about the other senior individuals connected to Worldspreads – those who were responsible for overseeing the company? They all seem to be getting on with their lives. Worldspreads is in the past, don’t you know?

The company’s founder and chief executive, Conor Foley, who suddenly resigned in 2012 days before the scandal broke, has always claimed he knew nothing about the financial irregularities, or the fact that the business he floated in 2007 was listed on the stock market on the basis of fictional figures in its accounts. All the directors claimed the same.

Foley is now involved with the Irish International Business Network (IIBN), an executive networking agency he founded and co-owns. The sponsors listed on its website include the State agency Enterprise Ireland, Bank of Ireland, AIB, the law firms Matheson and Beauchamps and the accounting firm Grant Thornton.

According to its website, an IIBN co-initiative received significant State funding between 2013 and 2016, the years during which the full scale of the shenanigans at Worldspreads became apparent. The initiative was even launched by President Michael Higgins in 2012, the year the Worldspreads scandal broke.

Foley’s Linkedin profile says he is now a consultant to “a new venture”.

His brother and Worldspreads co-founder, Michael Foley, who was also sitting on the board when the company hit the wall, has also moved on to other ventures, including a digital marketing business. He is also a director of the company behind Spark Crowdfunding, an unregulated entity that raises equity from the public for other businesses. And he is a director of a company that owns other businesses that appear to have raised cash from the public via Spark.

What about the other directors who sat on the board of Worldspreads and who were ignorant of what went on?

- Charlie McCreevey, the former minister for finance and EU commissioner, keeps himself busy with directorships including Virtu Financial, Murray and Spelman insurance brokers, and ECC Timber.

- Lindsay McNeile, the Eton and Sorbonne-educated dandy who was chairman of Worldspreads, and who breezily announced Foley’s departure days before the company collapsed, is now the UK chairman of a Nasdaq-listed US financial group. He is also a director of his son’s steak restaurant business in London.

- Polly Williams, a former KPMG partner, is now a trustee for the Guide Dogs for the Blind in Britain and a non-executive director of TSB Bank.

- Her former Worldspreads board colleague, David Leonard, a former global president of the Association of Chartered Certified Accountants, is also busy with various directorships.

- Meanwhile, Fergus Rice and Brian O’Neill, the former Worldspreads-turned Marketspreads executives, who were later sued in the High Court by Marketspreads’ new owners and bankrupted over the diverted €1.4 million, went on to run a sports spread-betting company.

The investors and clients of Worldspreads lost virtually everything. But for those who were tasked with overseeing the rotten business, it seems the show must go on.