Forget Lehman, imagine if Anglo had a 10-year reunion over cocktails?

Bankers, if you plan on partying for God’s sake don’t let anyone know about it 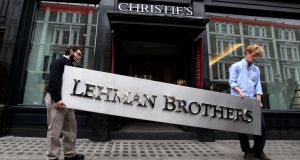 Two employees of Christie’s manoeuvre the Lehman Brothers corporate logo as it went on auction in September 2010 in London. Photograph: Oli Scarff/Getty Images

News last week of plans by former bankers at Lehman Brothers to hold a reunion marking the decade since the bank’s collapse sparked a Vesuvian eruption of apoplexy on the British hard left. Who could have thought it was possible for John McDonnell, the snarling Labour shadow chancellor, to get any redder than he already is?

You could almost feel his teeth grinding like tectonic plates as he lambasted the “absolutely sickening... disgraceful... unacceptable” event. Steady on there, Mac, it’s only cocktails and canapés, not a blood sacrifice. And, sure, haven’t some of your lot been quaffing Champagne since the invention of socialism?

Then again, looking at it from his point of view, you can see why an apparatchik like McDonnell might have felt the need to lash out, given his status as Corbynista-in-chief. The Lehman collapse on September 15th, 2008 was a pivotal moment at the outset of the financial crisis that brought the western world to the edge of penury. And here is a 200-strong coterie of its senior staff proposing to get together, 10 years and several hairshirt budgets later, in a swanky Mayfair venue to toast the olden days.

But, despite some plausible theories to the contrary, bankers are people too, you know. Old colleagues are entitled to meet up, renew relationships, reminisce, and even to have some fun. If a group of Lehman bankers want to get together to collectively recall a seminal day in their careers, maybe it is best to leave them at it.

“It would be ridiculous to say you can’t meet,” crisis-era Labour chancellor Alastair Darling told Financial News, which revealed the event. “Honestly, of all the problems we face today, frankly a bunch of people having a glass of wine is the least of them.”

Now imagine, for a moment, if it wasn’t former Lehman bankers that were planning to get together for a commemorative blowout, but the staff of Anglo Irish Bank. Proportionally, its collapse made Lehman’s look like a speed wobble. If Anglo’s impact on Ireland was scaled up and inflicted on the world-at-large in place of Lehman, we might all still be in the midst of a fiscal nuclear winter.

I would love to be a fly on the wall of, say, Solidarity TD Paul Murphy’s house if he was told former Anglo bankers were meeting up in Patrick Guilbaud’s next month to commemorate a decade since the bank guarantee, which tethered their rotten institution to the fortunes of the State. He’d have to be dug out of his own ceiling.

What about Irish Twitter? It would be set ablaze in an even more righteous fury than it is on any normal given day. You’d be able to warm the house off your smartphone. The nation’s clocks would probably stop. Sheep would start moo-ing, cows baa-ing.

There is a series of painful 10-year financial crisis anniversaries on the horizon for Irish people in the coming months. We’ll have a decade since the bank guarantee in September. Ten years since the effective nationalisation of Anglo just before Christmas. Its nationalisation, good and proper, a few weeks later...

At some stage, there may be a few quiet beers had somewhere, by some of those involved. If they have any sense, they will keep it to themselves, or they’ll risk getting drowned in opprobrium. Certainly, they should avoid doing what the Lehman bankers did this month, and don’t arrange any events on emails that get leaked to newspapers.

How Ireland deals with these anniversaries, now that we are all rich and smug again, will go a long way towards demonstrating just how far the nation’s wounds have healed. Are we still as angry as we – justifiably, back then – were?

It used to be visceral. At a former employer of mine, there was an old Anglo golf umbrella in the hat-stand in the corner of the newsroom. In the years immediately after the crash, it didn’t matter what the weather was like: I never saw anybody use that umbrella. It could have been bucketing down, but it was better to get wet than use the Anglo umbrella and get a kick in the backside walking down the street.

As for some of those directly involved in creating the Anglo disaster, it will never leave them. David Drumm, the former chief executive, is in jail for his crimes. Seán Fitzpatrick, Anglo’s former chairman, remains utterly despised by the public. John Bowe, Willie McAteer, Pat Whelan: they’ve all been punished.

Three years ago, I interviewed former Anglo non-executive director Gary McGann on the occasion of his receipt of the RDS Gold Medal for Enterprise. He has had one of the highest-flying careers in corporate Ireland. His achievements are stacked to the ceiling, hence the award.

Yet McGann, like others who helped oversee Anglo at that time, will never shake off his association with the bank that brought down a state.

“There is no aspect of that experience [being an Anglo director] that has any redeeming features for me,” McGann said.

On LinkedIn, you can trace the careers since the crash of many of Anglo’s former top staff. They pop up in senior positions at every other major bank in Ireland. Some of them are even in very influential credit risk positions at other institutions. They’ve apparently just gotten on with it.

Former minister for finance Brian Lenihan may or may not have been on to something when he said “we all partied”, even though the comment sparked anger at the time. But, bankers, please, if you plan on partying now, for God’s sake don’t let anyone know about it.

The airline’s reaction last week to the backlash over its obscene new cabin baggage restrictions and charges was straight out of Ryanair’s old, arrogant, anti-consumer playbook. Ryanair has slashed free cabin baggage limits by two-thirds and will charge for the small 10kg wheelie bags that every other airline allows on board for free.

Ryanair spun the yarn that the move is designed to facilitate quicker boarding, even though it appears to be a naked grab for ancillary revenues. Unless people are going for a day trip, they need to be able to bring more than a backpack. If they are going to be forced to pay to bring basic luggage, it may as well be built into their fares.

Ryanair’s charming reaction to consumer anger over the move? “Our flights are full of people who swear frequently they’ll never fly with us again... But we recognise it’s all about customer choice, so if customers want to choose higher fares and less punctual airlines, then so be it. Someone else will take their seat.”

What a childish, petulant, cocky statement from a publicly-listed company. Ryanair made its name challenging near monopolies and arrogant incumbents. Now it is behaving just like them. Hubris always come before a fall.

– As Supermac’s founder Pat McDonagh wrestles with the fallout of the ongoing planning permission “fake” letters controversy, he might spare a thought for John Schnatter.

Schnatter is the colourful founder of the Papa John’s pizza chain, for which Supermac’s owns the master franchise for Ireland. Schnatter is engaged in a war with his own board over his efforts to regain control of the company.

He stepped down from his position as chairman in a row over the alleged use of a racial slur. He has since posted letters on his own website, savepapajohns.com, claiming that the board recently agreed with him that the chief executive should leave and Schnatter should be re-appointed executive chairman.

Independent directors, however, this week hit back by releasing a statement rejecting Schnatter’s claims and accusing him of “promoting his self-interest at the expense of all others in an attempt to regain control”.

Schnatter also wants to be given control over Papa John’s upcoming annual conference, which is attended by all its franchisees, potentially including McDonagh.

“As the independent directors, we will defend the company against his actions and continue to do what is right for Papa John’s and our stakeholders,” the directors responded.