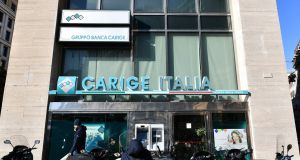 The European Central Bank appointed three temporary administrators on Wednesday to take charge of Italy’s Carige bank in an effort to save the struggling lender after it failed to raise new capital.

Italy’s 10th-largest bank failed last month to win shareholder backing for a €400 million share issue, part of a rescue plan financed by Italian lenders to shield the industry from the risk of another banking collapse.

The ECB stepped in after months of growing concern over the financial strength of Genoa-based Carige, the last major Italian bank considered to be a problem after the sector was hit by the financial crisis and Italy’s weak economy.

The central bank acted after the majority of Carige’s board, including chairman Pietro Modiano and chief executive Fabio Innocenzi, resigned over the failure to win approval for the cash call.

The ECB named Mr Innocenzi and Mr Modiano as temporary administrators, together with Raffaele Lener, an outside legal expert who has worked at both Italy’s market regulator Consob and the Bank of Italy.

Their appointment would lead to the removal of Carige’s management and control bodies, the ECB added.

Italy’s market watchdog earlier suspended trading in Carige shares for a day on Wednesday after a request from the bank.

Shares in other Italian banks fell on the news.

The bank’s top investor, the Malacalza family of steel entrepreneurs, blocked approval of the latest cash call at a December 22nd shareholder meeting, plunging the bank into a fresh crisis.

The European Central Bank, which directly supervises Carige, has told the bank to complete its capital strengthening plan and seek a merger with a stronger partner.

To stay afloat in recent years Carige has sold off its best assets, such as its insurance units, and so would struggle to attract a merger partner as recommended by the ECB.

The Malacalza family holds 27.6 percent of Carige after investing more than €400 million for a stake worth €20 million at current market prices.

Explaining their decision to block a new capital increase, the Malacalzas said they first wanted more clarity on the bank’s future business plan and possible merger options as well as any further requests from the regulator.

One source familiar with the matter said the administrators were tasked with trying to convene another shareholder meeting to seek approval for the cash call, but doubts remain over how the Malacalzas can be persuaded to change their stance.

Carige has raised €2.2 billion from investors in three cash calls since 2014, piling up €1.5 billion in losses over the same period, mainly due to bad loans. Carige’s troubles stem from decades of mismanagement and too much exposure to the depressed local economy.

It has also undergone a string of top management shake-ups since the Malacalzas replaced a local charitable foundation as the single largest shareholder in the bank. – Reuters