Caveat: Dublin a hotbed for type of global financial alchemy

Meet Medb, Badb and Eurydice, who jointly own scores of Irish firms 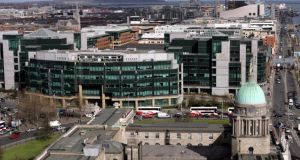 The Irish Financial Services Centre: home to many a special purpose vehicles A scene from the Oscar-winning ‘Il Postino’ 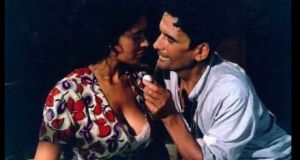 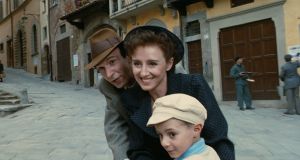 A scene from the Oscar-winning ‘Life is Beautiful, 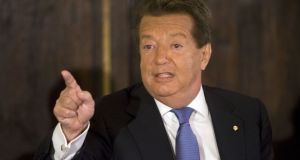 What have a mythological Irish queen famed for ravishing men, a legendary war goddess who took the form of a bloodthirsty crow, and a nubile Greek nymph who was killed by a snake have in common?

Answer: Medb, Badb and Eurydice – or, more precisely, entities named after them – jointly own scores of Irish companies.

The unregulated special purpose vehicles (SPVs) they own engage in some of the most exotic practices in global finance for international hedge funds and banks, holding billions of euro of assets in tax efficient structures.

It should be no surprise that Dublin, at times labelled the “wild west” of international finance, has become a hopping hotbed for this sort of global financial alchemy.

Here’s the bit that might not sit well with some: Medb, Badb and Eurydice are also Irish-registered charities, with tax-free status. Their “principal activity”, according to their audited accounts, is to raise cash for good causes.

Medb, Badb and Eurydice are controlled by Matheson, one of the top corporate law firms in Dublin, which routinely puts the charities at the disposal of international clients looking to house risky assets off balance sheet.

For a fee, they will act as trustee shareholders in an Irish company set up to hold an asset, such as an insurance bond linked to the risk of hurricanes. Charity might begin at home, but it gets saucy when it reaches the financial district.

The use of charities in this way is legal, and Matheson’s rivals offer similar services. But this practice has, according to documents obtained by Sinn Féin TD Pearse Doherty, raised concern among officials in the Revenue Commissioners.

As reported in yesterday’s Irish Times, a senior Revenue manager in April contacted the Department of Finance to query whether the deployment of registered charities for SPVs should be allowed by the Charities Regulatory Authority. Matheson practice in this area was singled out as an example.

The firm may argue that what it does is common across the industry. But to others, that it is standard practice to use charities registered for “the relief of poverty” to hold catastrophe bonds for a hedge fund is precisely the problem.

As well as providing services to financial institutions, Medb, Badb and Eurydice also operate as the Matheson Foundation, which donates money to many good causes, including several focused on needy children.

The latest accounts show Medb, Badb and Eurydice had income of €681,000 in 2014, roughly half of which came from donations, the rest from “service fees” likely linked to the shareholder services provided to Matheson clients.

About €354,000 was paid out to good causes. About €126,000, or 18 per cent of the income was written off as “unrecoverable” with no further explanation provided. A similar proportion was deemed “unrecoverable” in the audited accounts for 2013.

The law firm holds about €1.4 million in cash on behalf of the three charities, which is four times what the foundation paid out last year. Matheson appears to have held the bulk of this money on behalf of the charity for several years.

If the “primary purpose” of Medb, Badb and Eurydice is to raise cash for good causes, perhaps it would be better achieved if the cash was fully recovered and paid out as soon as possible. It won’t relieve much poverty until it leaves Matheson’s bank account.

Meanwhile, the Central Bank, Revenue and the Department of Finance have started sniffing around the SPV sector, trying to get a handle on risks that might lurk for the wider financial system. But it’s not as if it is a new area of activity. The Irish industry has been at the centre of this stuff for decades.

In 1998, McCann Fitzgerald helped Merrill Lynch to set up the gloriously-titled Dublin SPV Finance for an Italian Library of Movies, known as Films. It was, naturally, held on trust for “charitable purposes”.

Films issued about $200 million in debt as part of a complex transaction linked to the catalogue of Italian movie producer, Vittorio Cecchi Gori. The debt was supposedly underpinned by income derived from the rights to hits such as the Oscar winners, Il Postino and Life is Beautiful. The transaction was lauded by the securities industry at the time as “innovative” and “imaginative”.

Just two years later, there was a default and the whole transaction hit the buffers. The most recent accounts for Films, filed last October, reveal there is still a €200 million hole in its balance sheet that will likely never be filled.

The charitable trustee shareholder has itself since gone into liquidation. The directors of Films say they will soon liquidate the company.

It’s clear significant benefits from Dublin’s burgeoning population of racy SPVs accrue to the lawyers and accounting firms that help set them up. For Ireland’s financial and charity sector, there is mostly just reputational risk.

Eir just loves a glitzy bash, its propensity to party best encapsulated when it brought hundreds of people up to the Royal Hospital in Kilmainham last year for a laser performance by a human disco ball, to celebrate its rebranding.

The company stayed true to form on Tuesday, when it rebranded Setanta Sports as Eir Sport and announced it had secured the exclusive Irish rights to the 2019 Rugby World Cup. It also announced Eir Sport will be free for its broadband customers, for the next year, anyway.

Brian O’Driscoll was on hand to help with the high-octane launch at Eir’s headquarters, along with the Premier League trophy, the Sam Maguire and assorted other well-known cups and goblets. Newstalk’s Off the Ball show also broadcast from Eir’s offices.

One senior Eir executive sensed a massive wind-up when the huge screen at the back of the stage lit up with a picture of Arsenal’s Olivier Giroud right before we were due to hear from the consumer managing director, Jon Florsheim, a huge Tottenham Hotspur fan.

The rebel promptly wimped out. As soon as Florsheim strode on stage, the graphic switched to his hero, Spurs striker Harry Kane. One of his own.

Setanta founder Mickey O’Rourke, Eir Sports’ chief executive since the channel was bought by the telco, was on hand to help with the launch. He added to the sense of glitz with his very noticeable Armani socks.

There was no sign of Glen Killane, the former RTÉ executive who was yesterday announced as Eir Sport managing director. He had better buy nice socks.

Meanwhile, Eir was criticised on Twitter for a €7 price increase imposed this week on some customers. It said the increase had nothing to do with Eir Sport, although customers got a brochure for the channel with their increase notification. Few things in this life are truly free. Just air, as opposed to Eir.

The financial firm Davy, which was one of the advisers when the State sold a 20-year licence in 2014 for the National Lottery, has picked up a similar gig – in Cyprus, of all places.

The Cypriot government is considering privatising its lottery and has appointed a team of consultants to advise it. The panel includes KPMG Cyprus, QLot Consulting of Sweden, law firms from Belgium and Cyprus, and the Davy folk from sunny Dawson Street.

They will probably have to draw lots in the Davy office to see who gets appointed to the gig. What a slog it will be, flying back and forth to the sun-soaked island, with nothing to do on your down time but sit on the beach sipping zivania cocktails.

Corporate financiers of Davy, it could be you.