SocGen to pay €963m in settlement with Libyan wealth fund 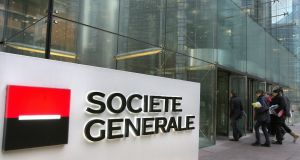 Société Générale reported a 19 per cent fall in quarterly net income after it set aside more money in litigation provisions, with the French bank also paying €963 million to settle a dispute with the Libyan Investment Authority.

SocGen said on Thursday in a separate statement that it had signed a confidential settlement agreement with the Libyan Investment Authority regarding a dispute between them that related to transactions dating back to 2007. “Given notably the additional provision for disputes booked in Q1 17 for €350 million, the impact of this settlement in full-year group net income is fully covered as from Q1 2017,” the bank said in a statement.

A spokeswoman for SocGen in Paris said SocGen was paying €963 million as part of the Libyan settlement.

First-quarter net income fell to €747 million from €924 million a year earlier. This came below the average of four analyst estimates of €975 million in a Reuters poll.

Revenues rose 4.8 per cent to €6.5 billion, above the poll average of €6.38 billion, boosted by its retail activities outside France, financial services to companies such as fleet management, and stronger results at its investment bank.