Goldman may cut London staff by 50% on Brexit

Up to 1,000 employees could go to Frankfurt and back-office staff relocated to Warsaw 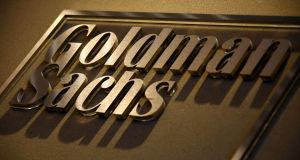 Goldman Sachs is to relocate staff, said Handelsblatt newspaper citing unidentified people in the financial industry. A spokeswoman for the bank said it hasn’t made any such decisions. Photograph: David Gray/Reuters

Goldman Sachs may halve the number of its London staff to 3,000 while transferring some to other locations as it prepares for the UK’s exit from the European Union, German newspaper Handelsblatt has reported, citing unidentified people in the financial industry.

A spokeswoman for the bank said it hasn’t made any decisions.

The company is considering moving as many as 1,000 employees, including traders and compliance managers, to Frankfurt as the firm shifts operations across the continent and to New York, the newspaper said. Some people in trading operations who develop new products would probably move to the company’s New York headquarters, it said.

Implications for the industry

“No decision has been taken and the numbers mentioned are none we would recognise,” company spokeswoman Nicole Mommsen told Bloomberg after the report. Goldman Sachs has said for months that it is still studying implications for the industry as the UK negotiates Brexit. The firm reiterated that position in October, when the Sunday Times said the company was preparing to shift 2,000 staff if Brexit costs banks easy access to Europe’s single market.

JPMorgan Chase & Co chief executive officer Jamie Dimon said earlier on Wednesday, in an interview on Bloomberg Television, that his firm is still waiting to see how the UK handles its break with the EU before making decisions on how to adjust London staffing.

“It looks like there will be more job movement than we hoped for,” Dimon said.

1 Why is Germany suddenly embracing its inner Keynesian?
2 Passengers face queuing in car parks at Dublin Airport
3 Avoca wins battle with Monkstown locals over cafe operation
4 Major credit union plans to limit savings accounts to €40,000
5 Aer Lingus confirms job cuts due to ‘decimation in demand’
6 Brother is dragging his heels as executor of uncle’s will - is there anything I can do?
7 Tesco to cut emissions by converting waste food from Irish stores to gas
8 Woodchester founder Craig McKinney dies
9 Prospect of foreign travel highlights remaining restrictions here
10 Domestic economy may get boost from multinationals
Real news has value SUBSCRIBE