Barclays may route Frankfurt trades through Dublin after Brexit 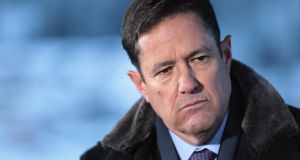 Barclays could look at reassigning its Frankfurt branch to its Irish subsidiary rather than moving out of London after Brexit, the bank’s chief executive said.

In an interview at the World Economic Forum annual meeting in Davos, Jes Staley said banks will need clarity about the transition period for Brexit.

“A two-year cliff is not helpful for anybody,” Mr Staley said.

“You can’t function with financial contracts that go beyond two years if there is that cliff,” he said, so “talking about transitions and phase-ins will be important.”

Bankers have started to reveal more about how they will shift jobs to preserve their ability to service the EU market if UK prime minister Theresa May’s Brexit plan makes London operations unworkable.

Mr Staley said it would be “very difficult” to move a financial centre such as London to another location. If needed, London-based Barclays may reassign its Frankfurt branch to its Irish business, which is a fully-fledged subsidiary with its own capital

“Same people, same traders, you have to book a trade in Ireland as opposed to London, but that’s not a wholesale move of our capability from London to Ireland,” he said.

Ultimately, he said, the UK and the EU have an interest in agreements that benefit both sides.

Governments won’t “preclude a company from managing its liquidity in the most beneficial place,” he said. “Right now that’s most likely London, and I don’t see why that’s necessarily going to change.”

Mr Staley’s position strikes a different tone to that of JPMorgan chief executive Jamie Dimon, who said on Wednesday that “it looks like there will be more job movement than we hoped for.”

HSBC chief executive Stuart Gulliver has indicated meanwhile that staff generating about 20 per cent of London revenue may move to Paris.