The bankers might be coming – but they’re not here yet 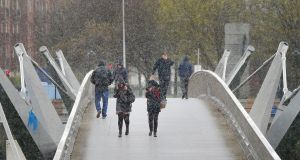 The IFSC in Dublin: LGT Bank (Ireland) Limited became the latest of the original IFSC banks to hand back its banking licence to the Central Bank in December. Photograph: Marc O’Sullivan

As expectations rise that a wave of financial services companies will make their away across the Irish Sea while the UK prepares to exit the European Union, figures from the Central Bank show that the swell is still a way offshore.

Just two new insurance companies were authorised in Ireland in 2016: Queen Street XII Re and Sofinsod Insurance. Reinsurer Queen Street XII Re is the latest in a number of reinsurance special purpose vehicles established in Dublin under the Queen Street name. Its principal activity is to place risks associated with US and Australian cyclones with the capital markets, and it has a reinsurance contract with Munich Re. Its directors include John O’Reilly, Brendan Roche and Peter Hughes. In May the company executed a $190 million (€180 million) catastrophe bond transaction, sponsored by Munich Re.

Sofinsod, a subsidiary of catering group Sodexo, was authorised by the Central Bank as a non-life insurance company.

Data from the Central Bank also shows that in December, LGT Bank (Ireland) Limited became the latest of the original IFSC banks to hand back its banking licence. It joins a line of other banks to do so in recent years, including DZ Bank, Rabo Ireland and Commerzbank. German banks, in particular, have retrenched their Irish operations against a background of increased scrutiny of lower tax jurisdictions such as Ireland in the German media.

The bank, part of the Liechtenstein based group LGT, which began life as the family office for Liechtenstein’s royal family, was primarily engaged in the taking of deposits and the provision of financing facilities to third parties. It opened in Dublin in 1993 and obtained a full banking licence in 1997.

However the bank, which employed 10 people in 2015, is not going to close. According to a spokeswoman for LGT, rather LGT Bank Ireland has become a branch of LGT Bank Ltd. in Liechtenstein, in order “to overcome regulatory restrictions”.

According to the spokeswoman, the branch structure will underpin the bank’s “growth momentum as it provides greater flexibility and enhances business opportunities in particular for its lending business”. The strategy of the branch will not change, she said, adding that it will remain a key lender for clients and LGT sponsored investment vehicles.

“In particular we would like to grow the asset management activities in Ireland and further increase assets under management as well as the number of investment products. The branch plays an essential role in expanding these activities,” she said.

In addition, a number of insurance companies also had their authorisations voluntarily revoked during the year. These included Accent Europe, Canada Life International Assurance and ESG Reinsurance Ireland.