Dublin’s German school gets enquiries ahead of Brexit relocation 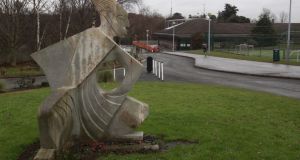 At St Kilian’s German School/Eurocampus in Dublin, the phone has been ringing more from overseas parents, as banks start to make relocation decisions. Photograph: Brenda Fitzsimons

The future of bankers in Brexit Britain may be decided in the classroom, not just the boardroom.

With UK prime minister Theresa May planning to trigger negotiations to leave the European Union by the end of March, the contest among continental cities to attract finance companies has been heating up.

The focus so far was on office space, guaranteed access to European markets and potentially lower living costs for bankers. But a new life for people outside the UK may also mean a change of school for their children. There’s already been a rise in enquiries about available places in Paris, Dublin and Madrid, said senior staff at international schools.

With the Republic being a possible destination for companies now based in Britain, not least because of the proximity and shared language. The Minister of State in charge of financial services, Eoghan Murphy, said in an interview this week that the prospect of losing access to the EU’s single market should lead to a wave of UK-based companies to announce they are relocating jobs to Ireland by the middle of this year. When it comes to education, the Government has said it is considering setting up a school that offers an international education based on the baccalaureate.

At St Kilian’s German School/Eurocampus in Dublin, the phone has been ringing more from overseas parents.

“How many of those are specifically because of Brexit is hard to say,” said Alice Lynch, principal of the school, which has 722 students from kindergarten through to secondary school.

“At the moment, it seems parents are trying to get the lay of the land rather than making firm decisions on school places.”

Applications are also up for places at Marymount School, an international school in Neuilly near Paris that teaches 360 children from nursery to eighth grade (age 13), said Kate des Places, external relations director.

“People tend to be very discreet about their reasons for moving,” she said.

TIC Recruitment, a careers website for international teaching posts, canvassed school heads for their views on Brexit. Peter Kotrc, director of the Brandenburg International School in Berlin, told TIC that cities such as Frankfurt that will likely attract banks away from the UK “will experience further pressure on school places and new schools will open.”

Families moving out of London should make their arrangements for their schooling well in advance, particularly is cities such as Geneva where capacity is already stretched, said Susan Krumrei, head of field research and consultant for Europe for the UK-based International Schools Consultancy. At Runnymede College in Madrid, for example, there are 40 vacancies a year filled to capacity for the last decade, Frank Powell, headmaster said.

“In a period of three weeks, I must have had inquiries from some 20 families of people in the financial industry in London, which is totally atypical,” said Mr Powell, headmaster of the British school to the north of Madrid with about 850 pupils. “Practically all of them prefaced this by saying they may be moving to Madrid.”

Bankers are still assessing what Brexit may bring. A report by Oliver Wyman on behalf of TheCityUK lobby group in October estimated that almost 70,000 jobs are at risk from a Brexit deal that withdraws Britain from the single European market. Banks want to retain “passporting” rights, which allow them to do business across the EU.

At HSBC Holdings, one of the most globalised banks, chief executive Stuart Gulliver said this week that trading operations generating a fifth of revenue for the lender’s investment bank in London may move to Paris.

“Activities specifically covered by EU legislation will move,” he told Bloomberg Television at the World Economic Forum in Davos.

An alluring lifestyle may be the clincher when it comes to siphoning jobs out of London. And with pressure on places, schooling is one area that might make the difference.

“A major consideration for individuals will be around schooling and their families, and London is very difficult to beat in that regard,” said Jamie Risso-Gill, a director at executive search firm Per Ardua Associates in the UK capital.

“London for many years has been set up and geared up for that. I can’t think of a rival city that can offer anything like a similar setup.”