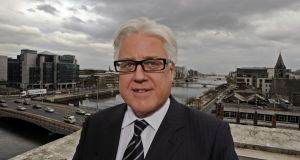 Former Ulster Bank chief executive Jim Brown, who was parachuted into the Republic by the lender’s parent Royal Bank of Scotland (RBS) during the financial crisis, has been hired by UK supermarket chain Sainbury’s to run its banking division.

Sainsbury’s Bank, which was established two decades ago as a joint venture with Bank of Scotland before the retailer took full ownership in 2014, offers a range of financial products including credit cards, savings and loans, mortgages as well as travel and life insurance.

Mr Brown, who hails from New Zealand, had been working for RBS in Asia for six years when he was given the task in 2011 of overhauling Ulster Bank as it was receiving regular parental bailouts, which would ultimately total £15 billion (€16.8 billion).

The executive left Ulster Bank in April 2015, months after RBS reaffirmed its commitment to the Irish bank on completing a strategic review, to take over as chief executive of the UK banking giant’s Williams & Glyn unit as it was being prepared for an initial public offering or sale.

Mr Brown quit Williams & Glyn (W&G) and RBS in 2017 after the group abandoned plans to hive off W&G because of the mounting costs involved and complexity of separating its 300-branch network and millions of customers.

The spin-off had been European Commission condition of RBS’s 2008 government rescue. However, the bank secured a concession from Brussels in September 2017 freeing it from the obligation.