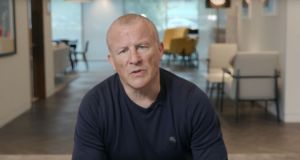 Neil Woodford made it clear he had no intention of scrapping fees as investors try to get their hands on their money. Photograph: Screenshot provided by Woodford Investment Management/PA Wire

Former star stock-picker Neil Woodford is used to holding his nerve. After all, up until the day his flagship fund was gated last week, he had stuck relentlessly to his strategy despite the dire performance of his investments.

That quality of refusing to bow to popular opinion can be an admirable one, but only if you end up a winner.

And it was on display again yesterday as Woodford stuck to his guns on fees for managing his suspended fund, thought to amount to as much as £100,000 (€112,000) a day.

Despite calls from MPs and the City regulator to scrap fees while his thousands of clients are unable to access their cash, Woodford made it clear he had no intention of doing so.

“The company will continue to charge the fee as the fund remains actively managed and we focus on repositioning the portfolio,” a spokesman said.

Woodford’s combative stance came just hours after Andrew Bailey, the head of the City regulator, had publicly urged the fund manager to make a gesture on his management fees, which range from 0.5 per cent to 0.75 per cent. “He should consider his position,” Bailey said.

Bailey’s comments followed those of Nicky Morgan, head of the influential treasury select committee, who highlighted the plight of his locked-in investors, some of whom have their life savings tied up in his £3.7 billion fund.

As scrutiny of Woodford’s ailing investment empire intensifies, it takes strong nerves indeed to go against the City regulator and treasury committee head, particularly as they will play key roles in determining what went wrong for the man who was once revered as “the British Warren Buffett”.

The former star stock-picker is not the only one under pressure amid the meltdown. The Financial Conduct Authority has questions to answer over accusations that it missed clear warning signs that something was amiss, as has Hargreaves Lansdown, the fund supermarket that was one of Woodford’s biggest City cheerleaders.

Woodford is now working furiously to liquidate his portfolio so that investors’ demands to cash-in can be met when the freeze on his fund is lifted. So he’s certainly earning his fees at the moment, but whether he should be charging them is another matter.

After all, his clients and City critics remember only too well that he and his business partner between them took out dividends of £36.5 million from the business last year, despite its dismal performance.

The future of Sir Philip Green’s retail empire and its 18,000 employees remains on a knife edge ahead of a crucial meeting of creditors today.

The vote to approve a restructuring of the Topshop to Miss Selfridge and Burton group was postponed last week after five hours when it became clear that Green did not have enough support to push through his planned rent reduction and store closure plan.

Green has since watered down his proposals for swingeing rent reductions but has failed to sway at least one key landlord, Intu Properties, which said yesterday it would not back the plan.

Intu, which owns the Trafford Centre in Manchester and the Metrocentre in Gateshead, is Arcadia’s biggest landlord and controls 15 per cent of the votes at today’s meeting. Green needs 75 per cent approval for his plan to be passed, failing which Arcadia is expected to crash into administration. Deloitte is understood to be on standby to handle the collapse if Green loses the vote.

It had been thought the pensions regulator might scupper the deal but Green won the watchdog over with improved terms ahead of last week’s meeting. Intu appears willing to take its chances on getting more out of an administration than it would from the rescue restructuring.

Like other landlords, it’s also reluctant to set a precedent for rent reductions that other struggling tenants might demand it match. Green’s original proposals included rent reductions of up to 70 per cent over three years for some of his 550-strong stores chain but that has now been softened to 50 per cent.

There was a rumour in the City last night that Green, who did not attend last week’s meeting, might actually fly in from Monaco to put his case directly to the landlords today.

Green has not been spotted in the UK since last year, but may feel the situation is grave enough to warrant his personal attention.

It’s hard to know, though, whether the attendance of the notoriously short-tempered former billionaire would do more to help or hinder his case.

1 Revised help-to-buy scheme opens for applications
2 ‘No demand... because there are no people’ at well-known Dublin pub
3 Divorce: What will it cost and can you afford it?
4 Nearly 30,000 could lose pandemic payment if they do not confirm eligibility
5 Transferring the family farm without a tax headache
6 Stocktake: A record-breaking cheating season
7 Charting the stock markets: does technical analysis work?
8 Shelbourne Hotel operator Marriott posts bigger-than-expected loss
9 ‘Saudi Arabia is where the opportunities will happen in future’
10 Sweden’s economy shrank less than euro zone’s at height of pandemic
Real news has value SUBSCRIBE