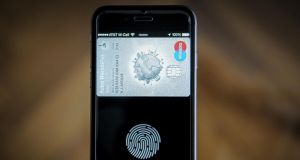 From September 14th, consumers will have to approve online payments for amounts above €30 through a second level of authorisation. Photograph: Jaap Arriens/NurPhoto via Getty Images

A senior executive with Stripe, the payments company founded by Limerick brothers Patrick and John Collison, warned in Dublin on Tuesday that incoming European Union security regulations covering online transactions will hit small businesses disproportionately and may cause some to fold.

From September 14th, consumers will have to approve online payments for amounts above €30 through a second level of authorisation, where the bank or payments firm and the business accepting the transaction are based in the European Economic Area. This would include entering a code received by a text message or scanning a fingerprint on a smartphone.

“Regulations like this might be built with good intentions, but compliance tilts the playing field in favour of big companies,” Michael Cocoman, global head of regulatory affairs with Stripe an audience at Financial Services Ireland’s annual lunch in Dublin.

“Building compliance for these types of regulations requires a lot of time and resources, especially for small and mid-sized businesses. If that investment starts to feel more like a cost some of them will consider abandoning compliance and risk incurring fines. If small firms can’t comply, they can’t compete and may relocate or fold.”

Stripe joined a number of retailers and payment processors, including Amazon and Worldpay, in warning earlier this month that the new SCA rules, designed to cut down on fraud, will put billions of euro of transactions at risk. The so-called strong customer authentication (SCA) rule is part of the EU Payment Services Directive which came into force early last year.

Stripe, which was set up by the Collisons in 2009 and employs more than 1,800 people globally, including 185 in Dublin, cited forecasts from a firm called 451 Research that Europe stands to lose €57 billion of economic activity in the first 12 months after SCA takes effect.

Mr Cocoman said that following the introduction of a similar measure in India five years ago, some businesses reported a 25 per cent overnight drop in “conversion rates” – where an internet user actually completes a purchase.

While it is highly unlikely that the incoming rule will be delayed at this stage, the industry is lobbying for a grace period to make sure that businesses are ready.

Mr Cocoman said that Stripe is making “huge efforts” trying to help firms using its system to prepare for SCA. “Three months before its implementation here, less than half of online businesses in Europe are prepared to address the requirements,” he said.

Stripe, based in the US and operating in 32 countries, was valued at $22.5 billion (€20 billion) by a fundraising round in January.