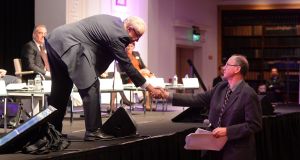 Patrick Kehoe shakes hands with Richard Pym, chairman of AIB, after he received an apology for how his accounts had been handled by the bank at the AIB annual general meeting. Photograph: Dara Mac Dónaill/The Irish Times

Minister for Finance Paschal Donohoe’s move on Wednesday to vote against AIB’s plan to return to paying executive share bonuses has been backed by the European Central Bank’s top banking supervisor.

Meanwhile, AIB’s chief executive officer, Bernard Byrne, warned that the lender faces growing challenges attracting and retaining staff as incentive schemes continue to be banned, noting that the group has lost more than 20 senior executives over the past five years. “That’s quite a lot,” he told reporters after the group’s annual general meeting (AGM) in Dublin.

Mr Donohoe’s vote at the AGM lived up to his pledge last week that he would use the Government’s 71 per cent stake in the bank to take such a stance as he put the controversial topic of bankers’ remuneration out to consultation. He represented 76.1 per cent of the votes cast, as the non-binding resolution was defeated by that percentage.

Almost all of the remaining AIB shareholders that took part in the vote backed the return of bonuses, which have been prohibited across bailed-out banks since the onset of the financial crisis.

Still, the Minister received support in his view on bonuses from Daniele Nouy, head of the ECB’s banking supervision arm, who signalled on a visit to Dublin that Irish bankers do not deserve bonuses until they have resolved their problems.

It also emerged on Wednesday as the Central Bank issued updated figures on an industry-wide tracker mortgage scandal that AIB’s level of customers acknowledged to have been impacted by the controversy rose by 1,800 since the end of December to more than 11,000. The sector also continues to grapple with much higher level of non-performing loans than the European Union average.

“Is this the moment right now to think about bonuses when you still have work to do on your balance sheet, to clean the balance sheet before the next crisis?” Ms Nouy said in an interview with RTE News. “Definitely not, in my view.”

AIB chairman Richard Pym told the AGM that with top executives and non-executives still holding low levels of AIB stock some 10 months after the bank returned to the main Dublin and London stock markets, “the very strong political control over certain aspects of its behaviour” is a “very valid” reason for some directors to maintain limited holdings. AIB received a €20.8 billion bailout during the financial crisis.

Earlier on Wednesday, AIB issued a trading statement saying it has started off the year “with strong profitability” as its gross loan book increased by €300 million to €63.6 million in the first quarter amid an 18 per cent surge in new lending in Ireland.

The bank’s non-performing exposures (NPEs), comprised of impaired loans and those that have been restructured but on a probationary period, fell by €1 billion to €9.2 billion as it worked through individual cases and benefitted from a harmonisation of definitions of defaulted loans under new accounting rules, known as IFRS 9.

Looking ahead, AIB said that the economic backdrop remains “favourable”, while it remains focused on “driving efficiencies through the evolution of our operating model and reducing NPEs to normalised levels”.

Meanwhile, Mr Pym extended a public apology to small shareholder and AIB customer Padraig Kehoe, who had consistently used the bank’s AGMs since 2005 to highlight issues over how his accounts had been handled.

“Mr Kehoe, I apologise for the failures of this bank to deal with these matters in an expeditious manner,” he said.