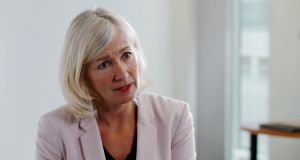 Ulster Bank has raised €1 billion from its first sale of mortgage-backed bonds in more than a decade, as the lender prepares to parachute a new chief executive from its parent, Royal Bank of Scotland (RBS), into the business.

The Dublin-based bank, which required a £15 billion (€17.1 billion) bailout from RBS during the financial crisis, said on Monday that the sale of residential mortgage-backed securities (RMBS) through its Ardmore Securities Number 1 vehicle was oversubscribed, with strong interest from UK and European-based investors. The bonds are due to mature in 2057.

The deal “provides further funding to support increased lending to the Irish economy,” said outgoing chief executive Gerry Mallon, who signalled in January he was quitting Ulster Bank to head up Tesco Bank in the UK. “It is another important milestone as the bank continues to increase strength and sustainability.”

Ulster Bank’s first sale of RMBS to outside investors since 2007 comes days after it emerged that a senior executive with RBS in the UK, Jane Howard, is being lined up as Irish unit’s next chief executive.

While a spokeswoman for Ulster Bank decline to comment on the development, saying no appointment has been made, Ms Howard would become the third woman in charge of the six “systemically important institutions” in Ireland, as identified by the Central Bank.

Bank of Ireland has been headed by Francesca McDonagh since last October, while German-owned Defpa Bank is led by Fiona Flannery.

Last week, Fitch, one of the world’s top-three credit ratings firms, confirmed its low investment-grade BBB stance on Ulster Bank, saying that RBS, which reaffirmed its commitment to its Republic of Ireland unit in late 2014 following a review, would most likely provide extraordinary support to the business if required.

Ulster Bank has returned €3 billion by way of special dividends to RBS in the past 18 months.