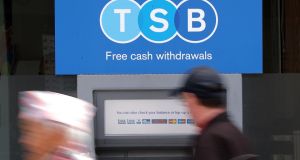 A man uses a TSB cash machine in Ashford, Kent. The bank’s boss, Paul Pester, has apologised for IT issues which left up to 1.9 million online customers unable to access their money and some able to see other people’s accounts. Photograph: Gareth Fuller/PA Wire

A family stranded abroad because they can’t buy the petrol they need to get to the Eurostar terminal; a couple forced to abandon their house purchase because the deposit got “lost” in the system; and a household without food because the shopper was unable to pay for groceries at the supermarket.

Yes, it’s another IT meltdown in the banking industry, this time at TSB, the “challenger” bank spun out of Lloyds Banking Group four years ago to help battle the dominant market position of the big banks.

It started with a planned outage at 4pm on Friday, as TSB finally separated its systems from former owner Lloyds, and should have ended at 6pm on Sunday.

Customers had been warned in advance that online banking would be unavailable during that period but, for reasons TSB has yet to explain (and may still not know itself), nothing was working when the system went live again on Sunday evening.

So Tuesday marked the fifth day that up to 1.9 million TSB customers found themselves locked out of their online banking accounts, with little guidance from the bank on when the issue would be resolved. Customers reported waiting over an hour on the phone for help, and queues formed at TSB branches.

Those who could access their accounts flooded social media with reports of rogue credits and debits, some timed for decades ahead of the current date. Equally alarming were the reports of data breaches on hundreds of accounts, with some customers saying they were able to view the confidential financial details of others.

He broke his silence on Tuesday morning, saying he’d “just resurfaced after 48 hours with my teams who have been working as hard and fast as they can to get our services back up and running”.

That tweet didn’t go down well with TSB’s increasingly frustrated clientele, particularly as Pester appeared unable to give any clear indication of when the problems would be fixed.

This is the latest in a long list of systems failures to hit the banking industry. Coincidentally, Ulster Bank has also been hit by IT problems since the weekend, with customers reporting money – including monthly salaries – suddenly going missing from their accounts and some credit and debit card payments declined.

For customers of Ulster Bank, which is part of Royal Bank of Scotland, the glitch will bring back memories of one of the banking industry’s biggest-ever IT failures. In the summer of 2012, millions of RBS customers found themselves locked out of their accounts for days; at Ulster Bank it was even worse, with many customers affected for several weeks.

RBS paid a heavy price for its IT meltdown: fines of £56 million from the regulators and a £70 million bill for compensation. That incident, which was caused by uninstalling a software upgrade, involved many more customers than those affected at TSB, but the challenger bank will also find its failure comes at a cost.

Pester has said customers will not be left out of pocket as a result, and the bank is likely to face fines not only from the financial regulator but also from the Information Commissioner’s Office for any data breaches. The size of the fines and compensation will depend on how quickly TSB can get things back under control. Things weren’t looking too bright on that front on Tuesday evening.

The TSB board will also pay a price. Pester and a team of 30 senior managers had been due to receive millions of pounds in bonuses for pushing through the systems upgrade – although these were put on hold after the timetable slipped. After this week’s debacle, it would be extraordinary if they were to receive anything extra at all.

MPs are also demanding answers, and bank executives can expect to find themselves explaining what exactly went wrong in front of a parliamentary committee in the coming months.

The sense that nobody at the bank really knew what was happening was heightened on Monday when TSB’s owner, the Spanish Banco Sabadell, issued a statement blithely announcing that it had “successfully completed the TSB technology migration”.

The bank’s chairman, Josep Oliu, boasted that the exercise had proven the bank’s “technological management capacity, not only in national migrations but also on an international scale”.

Perhaps he should have checked with his London office before pushing out the obviously pre-prepared press release. But then, perhaps he couldn’t get through on the phone either.

1 NI house builder apologises to Harry and Meghan over adverts
2 Volvo warns of scaled back car line-up if UK splits from EU rules
3 Opioid executive admits to ‘no morals’ ahead of prison term
4 US threatens retaliation against EU over proposed carbon tax
5 CPL founders Anne Heraty and Paul Carroll in line for €1m dividend payout
6 Little strategic thinking in election manifestos of Fine Gael and Fianna Fáil
7 Are there annual limits on inheritances or gifts to a child?
8 South Dublin Credit Union members urged to borrow more to ensure survival
9 Greencore to prove update on business after US exit
10 American YouTubers embrace the crisp sandwich
Real news has value SUBSCRIBE