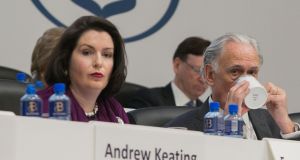 Bank of Ireland has detected that Brexit-induced investment paralysis across Irish firms has begun to ease as they look towards fresh opportunities, according to its outgoing chairman.

“In the Republic of Ireland, we have seen a range of customers holding back on decisions due to the uncertainty factor [surrounding Brexit]. However, just in recent times we are seeing a releasing of that, people starting to make more investment decisions,” Archie Kane, who is to step down as chairman in July, told investors at the bank’s annual general meeting (agm) on Friday.

The country’s largest bank by assets said in a trading statement before the agm that it has seen its net loan book begin to grow again for the first time since the start of the crisis, as new lending begins to outstrip the pace at which borrowers are repaying loans.

The group said it continues to trade in line with expectations, with economic growth in its core Ireland and UK markets remaining positive, notwithstanding ongoing uncertainties about Brexit.

Gross new lending in the first quarter rose by 20 per cent, including a 33 per cent increase in new mortgage advances in Ireland, where its market share was 28 per cent for the first two months of the year.

The agm marked the first major outing before shareholders for the group’s chief executive of less than seven months, Francesca McDonagh, and Mr Kane’s last. The chairman will be succeeded by Patrick Kennedy, a former chief executive of bookmaker Paddy Power.

Meanwhile, Ms McDonagh said that Bank of Ireland has made offers amounting to €130 million to customers who were caught up in the country’s tracker mortgage crisis.

Some 80 per cent of these borrowers have so far accepted the bank’s offer of redress and compensation, she said.

All told, the bank had contacted 97.5 per cent of the 9,300 affected customers as of last week. These comprise 3,300 loans where borrowers had been put on the wrong rate, with a further 6,000 wrongly denied their right to a low-cost mortgage linked to the European Central Bank’s main rate.

Mr Kane said the bank’s tracker issues were primarily down to issues in its “systems, and administrative errors”, which is why it is important for the bank to make progress with its €900 million information technology overhaul.

“We are not proud of it at all and we intend for it not to happen again,” he said.

1 Boeing identifies new software flaw in grounded 737 Max
2 Whiskey a go go: sales top $1bn in US
3 GoMo is being investigated by advertising authority
4 Election adds to headaches for AIB boss Colin Hunt
5 ‘Life in Vilnius reminds me of Ireland in the 1990s’
6 The Irish economy is thriving but if you’re not feeling it – here’s why
7 New €18m hangar at Shannon can contain world’s biggest aircraft
8 Warehouse bemoans ‘difficult’ Irish retail landscape as it fails to make profit
9 Dublin housebuilder records €11m gain after striking deal with bankers
10 Dublin has third highest residential rents in Europe
Real news has value SUBSCRIBE