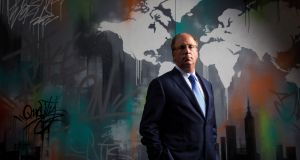 Larry Fink, founder and chief executive of the investment firm BlackRock, said that a ‘tectonic shift’ in the investment landscape was happening faster than he expected. Photograph: Damon Winter/The New York Times

BlackRock, the world’s largest asset manager, will push companies to commit to achieving net-zero emissions by 2050 and raised the prospect of dumping companies that fail to do so from its actively-managed funds.

In a pair of letters sent on Tuesday to chief executives and to BlackRock’s clients, chief executive Larry Fink said that a “tectonic shift” in the investment landscape was happening faster than he expected.

Investors are reallocating capital towards companies with robust environmental, social, and governance practices, Mr Fink said in his annual letter to business leaders. “There is no company whose business model won’t be profoundly affected by the transition to a net-zero economy”. he wrote.

With almost $8.7 trillion in assets under management, including more than $5 trillion in passive investment vehicles that track market indices, BlackRock is a major shareholder in most big companies around the world.

The asset manager will ask investee companies to disclose their planning for meeting a target of emitting no more carbon dioxide than they remove from the atmosphere by 2050, Mr Fink said.

In a separate letter to clients, BlackRock outlined risk management tools to help investors prepare their portfolios for a net-zero world - as well as steps it would take should companies fall short of managing that transition.

BlackRock said that lack of progress by companies would prompt it to “not only use our vote against management for our index portfolio-held shares, we will also flag these holdings for potential exit in our discretionary active portfolios because we believe they would present a risk to our clients’ returns”.

Mr Fink warned that “companies that are not quickly preparing themselves will see their businesses and valuations suffer, as these same stakeholders lose confidence that those companies can adapt their business models to the dramatic changes that are coming”.

“From automobiles to banks to oil and gas companies... companies with better ESG profiles are performing better than their peers, enjoying a ‘sustainability premium’.”

BlackRock is not the only fund manager pushing companies to slash emissions. A group of 30 of the world’s largest asset managers, including Fidelity, Legal & General Investment Management, Schroders, UBS Asset Management, M&G, Wellington Management and DWS announced in December that they were committed to cutting emissions linked to their portfolios to net zero by 2050.

The best way for an investment manager to push for investee companies to adopt a net-zero goal is to call on the companies to set “near-, medium- and long-term science-based targets for their own emission reduction trajectory, commensurate with the needs for their own industry,” said Eli Kasargod-Staub, co-founder of Majority Action, a campaign group. - Copyright The Financial Times Limited 2021