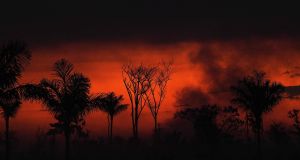 It can be argued there is too much doomsday talk when it comes to climate disruption as this does not necessarily translate into meaningful action. But predictions by 17 leading scientists, who have charted “a ghastly future for civilisation”, cannot be ignored. Their study warns of a world about to lose the ability to control what is unfolding. This has particularly worrying implications for global leaders and politicians attempting to steer citizens to a better place and ensure they have a healthy Earth to inhabit.

A loss of biodiversity and accelerating climate change in coming decades coupled with ignorance and inaction “is threatening the survival of all species, including our very own”, they declare in Frontiers in Conservation Science. “Humanity is causing a rapid loss of biodiversity and, with it, Earth’s ability to support complex life. But the mainstream is having difficulty grasping the magnitude of this loss, despite the steady erosion of the fabric of human civilisation,” according to lead author Prof Corey Bradshaw.

In Ireland’s case, there is little immediate prospect of curtailing carbon emissions

Population expert Prof Paul Ehrlich said no political or economic system, or leadership, was prepared to handle the predicted disasters, or even capable of such action. “Stopping biodiversity loss is ...trailing far behind other concerns such as employment, healthcare, economic growth, or currency stability. Growthmania is the fatal disease of civilisation,” he argued, and must be replaced by campaigns that make equity and wellbeing society’s goals. The thrust of his argument holds good, though other research suggests by mid-century population growth is less likely to be a fuelling factor.

There is enough scientific knowledge available to confidently predict the consequences of inaction. Yes, there is growing evidence of big commitments to address an overheating world. The latest findings suggest, however, the problem is bigger than is being acknowledged and lack of urgency persists. This week Ireland joined 50 countries at the One Planet Summit committing to protect at least 30 per cent of the world’s land and oceans by 2030 in an attempt to halt the biodiversity crisis. This was an impressive virtual gathering of heads of state and government, yet a 2020 assessment showed the world failed to meet a single UN Aichi biodiversity target to stem destruction of the natural world. In Ireland’s case, there is little immediate prospect of curtailing carbon emissions, even while the State continues to highlight its “greenness”. The scale of ongoing species loss is such that this flag-waving might be better described as environmental fraud.

If people understood the magnitude of the crises, changes in politics and policies could match the gravity of the threat, the scientists contend. That means much more than individual actions like using less plastic, eating less meat, or flying less. It’s about big systematic changes – and fast.