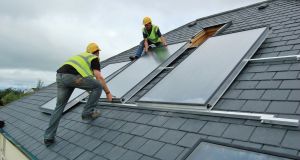 The new microgeneration support scheme will provide a route to market for citizens and communities which will allow them to generate their own renewable electricity, such as from solar panels on their roofs and sell it to the grid. Photograph: Construct Ireland

Thousands of individuals, farmers, businesses, sports organisations and community groups will be able to sell renewable electricity into the national grid under a scheme set to be operational by July.

Minister for the Environment, Climate and Communications Eamon Ryan announced on Thursday design options and a consultation process prior to rollout.

The new microgeneration support scheme is being designed to provide a route to market for citizens and communities which will allow them to generate their own renewable electricity, such as from solar panels on their roofs, “and receive a fair price when they sell the excess into the grid”.

Community, sports and social enterprises will be able to participate if they are electricity consumers (i.e. they have an existing electricity meter for their club house, hall and/or grounds), a spokeswoman for the Department of the Environment, Climate and Communications confirmed.

The scheme seeks to establish a “renewables self-consumer” model of energy generation and consumption in Ireland; to support community and citizen participation in transitioning to a net-zero carbon economy, and to help meet 2030 targets, notably, 70 per cent renewable energy on the grid.

Mr Ryan said: “It will allow people and communities to become active participants in the energy transition. By producing and selling their own electricity citizens, farmers, business owners and community organisations can save on their energy costs and reduce their carbon footprint. I urge interested parties to get involved and have their say.”

Micro-generators will primarily serve their own consumption needs but will be able to receive payment for excess electricity exported back to the grid. They must meet minimum energy efficiency requirements (under BER ratings) for their properties, and may need to carry out retrofit activities to qualify. It is likely that more modern buildings built to higher energy standards will find it easier to participate.

After consideration of submissions, which must be sent by February 17th to the Department of the Environment, Climate and Communications, a final design will be submitted for Government approval.

The scheme is being rolled out in response to a solar strategy commitment in the programme for government and to comply with the EU clean energy package. It must protect vulnerable customers – and be accessible to all electricity customers.

There is also a responsibility on industry to play its part in bringing to market technology options that will minimise and control costs for households and businesses alike, Mr Ryan said.

Consultants have advised the Government on the suitability of including “micro-solar”, wind, hydro and combined heat and power (CHP), and whether financial supports are necessary to incentivise their deployment. They also evaluated potential for public buildings and schools to be involved. Domestic solar PV is expected to have by far the largest share of uptake.

A smart export guarantee mechanism is recommended, which is an obligation on licensed electricity suppliers of a specific size to offer an export tariff to renewable generators with eligible installations.