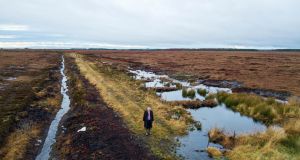 Paul Connaughton on the Carrownagappul bog near Mountbellew, that has undergone restoration. Photograph: Andrew Downes, xposure

Former Fine Gael TD Paul Connaughton took a lot of convincing when he heard others extol the merits of restoring Carrownagappul bog on the outskirts of the north Galway village of Mountbellew.

A TD for Galway East for 30 years from 1981 to 2011, Connaughton, a farmer both before, during and after his political career, had close ties with Carrownagappul since his family had taken turf from it for four generations.

Fired by that background, he was one of the leaders of a long, but ultimately unsuccessful campaign against the ban on harvesting peat from raised bogs designated as Special Areas of Conservation (SAC).

In every battle, however, there comes a truce, with protracted negotiations between the Carrownagappul turf cutters, the government and the European Commission ending in 2012.

Some of the more than 100 families who owned turf banks in the bog took the compensation offered; others such as the Connaughtons were relocated to a bog a short distance away. He says the 1,200 acre raised Carrownagappul bog produced “the best of turf in Ireland”; but the plot owners’ attachment to the place extended beyond turbary rights, their ancient rights to the bog.

People resented being told that they had to give up land passed down for generations.

Nearly 10 years on, his links to Carrownagappul remain as strong as ever; but they have evolved. Instead of harvesting turf, Connaughton is one of a number of locals working to restore it.

The €5.4 million European Union-funded pilot programme, called The Living Bog, is working to restore a dozen of Ireland’s 53 raised bog SAC sites, but the work at Carrownagappul is the largest. Drains are being blocked with peat and plastic dams to raise water levels and rewet the bogs, which encourages the growth of sphagnum mosses, the main ingredient of peat. The restoration work was completed in 2018, with more than 1,000 peat dams constructed. Already, scientists can see that rewetting is working and the bog is starting to recover.

In November, Bord na Móna, which harvested bogs for generations, announced its ambitious €126 million plan to restore 80,000 hectares of bog with much fanfare, but with local doubts, too.

Ronan Casey, The Living Bog’s public awareness manager, says that it is hard to overstate the importance of peatland restoration in Ireland’s efforts to combat climate change.

“There is no better, quicker or cheaper way for Ireland to reduce its carbon footprint than restoring peatlands. Peatlands are Ireland’s biggest carbon store; one-fifth of our soil is peat soil.

“Locking [CO2] in is just as good as trying to plant trees somewhere else. They store far more carbon dioxide than forests. A 15cm thick peat layer contains more carbon per hectare than a tropical forest.”

Peatland restoration is important environmentally, but it is important locally, too. Carrownagappul, criss-crossed by bog roads and tracks, is one of five bogs marked to become places for visitors to enjoy.

Planning permission was recently granted for a boardwalk and there are plans for an educational centre where people can learn about peatlands, their history, ecology and functions.

One of the main reasons why Carrownagappul, located half-way between Tuam and Athlone, was chosen was because of the “appetite” shown by local people, Casey says.

“What emerged was people’s desire to bring people to see the bog. The sacrifice of the turf cutters was so great that they wanted to show people what they had given up.”

The local contribution has been “vital”, he says, especially because much of the land remains in private ownership. “So, the local communities are as much stewards of the land as government bodies.”

Like all peatlands, the Carrownagappul bog is home to a range of flora and fauna, including 25 varieties of moss as well as insect-eating plants and lichen; Casey refers to it as “Ireland’s coral reef”.

During the pandemic, many locals also gained a new appreciation of the bog, Connaughton says: “It was a help to all our neighbours to overcome the claustrophobic element of being inside their own houses. I never heard greater praise for the walks than in the last few months.”

Connaughton is one of a number of former turf cutters who join Casey when he visits local schools and community groups to explain the environmental benefits of bog restoration, as well as the local turf-cutting history.

An information video on the bog is proving popular with old and young viewers. “I spent a lifetime walking on the bog and working on it,” Connaughton says.

“When I saw that film, I said to someone that I hadn’t seen a quarter of the things featured in it. That’s the whole thing; getting people in and looking for those things because they are all there. You could walk across the bog a thousand times, and I have, and I never saw them.”

Some locals are already trained as guides, ready for life when Covid-19 travel restrictions are lifted. Rebranded Galway’s Living Bog, it is hoped that Carrownagappul will become a destination for visitors to the county.