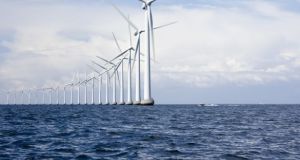 Island communities off the west coast are to join forces with a view to generating offshore wind energy tied into hydrogen fuel production through a new network of local energy co-ops.

Five island communities, on Valentia, Achill, Arranmore, Aran and Rathlin, have come together to co-ordinate efforts on deploying floating wind turbines combined with green hydrogen production. They have recruited an expert team to help bring the project to fruition.

The west coast is especially suited to developing these technologies which generate hydrogen using devices known as electrolysers and have been successfully deployed on land.

A consortium, led by Valentia Island Energy Co-operative (VIES) in Co Kerry, has said it is to pursue offshore hydrogen generation with a view to ultimately exporting the fuel to Europe.

Colum O’Connell of the co-operative said Ireland had enough potential renewable energy off its coasts “to power ourselves and much of Europe”.

The east coast was ideal for offshore electricity generation plugged into the grids of Ireland and the United Kingdom, he said. “The weaker electricity grid and deeper offshore waters of the west of Ireland require a different solution. Using floating platform wind turbines and hydrogen energy storage, we can capture this energy and replace fossil fuels used in heating and transport,” Mr O’Connell said.

They had identified a clear path which puts Ireland and west coast communities “at the heart of a transition to true sustainability”, he insisted.

The group includes hydrogen experts, third-level institutions and technology providers, combined with a direct path to finance and markets “and at its heart, a community which is informed and eager to participate”.

Dr Rory Monaghan of NUI Galway Hydrogen Supply Chains welcomed the approach. “As countries in Europe’s industrial core, including France, Germany and the Netherlands, launch national hydrogen strategies, they all face a common question: who will supply cost-effective green renewable hydrogen at scale? With our enormous renewable energy resources, Ireland has the opportunity to be Europe’s pre-eminent green hydrogen supplier. Now is the time to plan for this.”

Cormac Walsh, chief executive of Energy Co-operatives Ireland, said it was working with the island communities on the initiative. “We are at a point where offshore hydrogen production for export is technically feasible and is creating a paradigm shift in the decarbonisation of the world’s energy requirements,” he said. An achievable goal of more than 30 gigawatts of floating wind generation, twinned with hydrogen electrolysers, was realisable off the west coast.

“With the right policy support and community participation and acceptance, this is achievable over the next 15 to 20 years,” he said.